Challenges posed to women’s rights and gender equality by neoconservative ‘pro-family’ and ‘anti-gender’ forces have been drawing attention of gender scholars and activists from across the globe (see the recent post by Sonia Corrêa in this blog). Using Russia as a case, in this post I take a closer look at the ‘traditional values’ ideology and the ways its been instrumentalised by the Russian elites.

In Central and Eastern Europe ‘anti-gender’ movements – with their traditionalist agendas have been blossoming with particular vigour in recent years, especially, in Hungary, Poland, and Russia. The efforts of Russian neocons even have a global dimension – since 2010 the country has been leading a campaign at the UNHRC to recognise so-called ‘traditional values’ as a legitimate consideration in human rights protection and promotion. In Russia, ‘traditional values’ also have already been enshrined in some domestic legislation (e.g. the 2015 Russian National Security Strategy).  Most analyses so far have concentrated on the nationalist ends of the ‘traditional values’ ideology mobilisation. In this post I argue that we should also consider how this ideology is used to legitimise rampant economic inequalities currently existing in the Russian society. 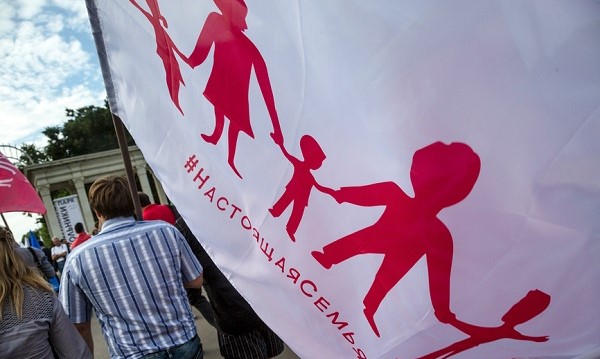 Participants of the family festival ‘The Real Family’ dedicated to the Day of Family, Love, and Fidelity (Moscow, July 8, 2015) © Nikolay Vinokurov / Fotobank Lori

‘Traditional values’ – what are they?

‘Traditional values’ is a rather poorly defined concept, and in various pieces of legislation and political statements that reference them one finds different definitions. The most recent definition from the 2015 Russian National Security Strategy (paragraph 78) includes the following list:

priority of the spiritual over the material; protection of human life and of human rights and freedoms; family; creative labour; service to the homeland; moral and ethical norms; humanism; charity; fairness; mutual assistance; collectivism; the historical unity of the peoples of Russia; the continuity of our motherland’s history.

Despite both the vagueness and broadness of the definition, however, regulation of gender relations consistently appears to be at the core of the ‘traditional values’ agenda. So far the pieces of proposed and passed legislation that do reference ‘traditional values’ were almost exclusively concerned with the latter – for example:

The Concept of the Russian Federation’s State Family Policy up to 2025 outlines family-specific ‘traditional values’ as:

marriage as a civil voluntary union between a man and a woman registered in the Department of Civil Records (ZAGS); created with a purpose of family formation, birth and/or joint upbringing of children; based on care and respect towards each other, towards children and towards parents; characterized by the free will to enter and leave the union, the stability and the joint household; united by the common goal of spouses and every family member to preserve this union.

The ideology of ‘traditional family values’ thus aims to legitimize only very specific forms of gender relations, i.e. heterosexual, fecund, based on the provision of unpaid care, etc. Differentiation of gender roles and gender inequality that are inherent to such forms of gender relations – although not openly endorsed in the legislation – represent essential elements of this ideology.

‘Traditional values’ for the nation

So far, the mobilisation of the ‘traditional values’ ideology and related legislation changes in Russia have been analysed by experts as a primarily nationalist project. First, restrictions of reproductive and sexual rights implemented under the umbrella of ‘traditional family values’ have been shown to underpin the state’s biopolitical goals of improving birth rates (which recently started falling again) and population health (Russian men, for example, still have one of the lowest life expectancies in Europe and Central Asia). Second, appeal to ‘traditional values’ in the international arena has allowed Russia to position itself as the leader of the global social conservatism. In the National Security Strategy, for example, ‘the preservation and augmentation of traditional Russian spiritual and moral values’ is listed as one of the ‘strategic aims of ensuring national security’ (paragraph 76). ‘Traditional values’ are presented in the Strategy as both something that distinguishes Russian ‘culture’ from the liberal West (which is, however, not referred to directly) and as something that should be protected from the influence of the latter.

The need for class analysis in the debates on the rise of neoconservative ideologies have been emphasised in a number of recent sociological studies.[ii] The issue of class and economic inequality, however, has been notably absent from the debates about ‘traditional values’ in Russia.

This omission is noteworthy for several reasons. First, Russia is currently one of the most economically unequal major economies in the world, with top income shares being comparable to those in the US and the wealth held by the elite offshore to be comparable with the total household financial assets kept within the country. Second, some of the policy documents referencing ‘traditional values’ explicitly mention the issue of income and property inequality in general, as well as inequality between different types of families. For example, in the National Security Strategy ‘the intensification of differentiation within the population in terms of income levels’ is listed as one of the key threats to the quality of life of Russian citizens (paragraph 51).  Finally, some voices among the Russian neocons, such as, for example, the For Women of Russia party, directly identify ‘the fattened elite, accustomed to keeping the people half starved’ as the root of ‘the crisis of Russian families’. When it comes to proposing solutions, however, For Women of Russia focuses on promotion of ‘traditional family values’ and ‘self-reliance’ of the family – rather than on redistributive measures. The need for families to be economically independent and self-reliant is also emphasised in the Family Policy Concept (discussed above), which states that ‘the increase in families’ well-being could not be achieved without complex state policy directed at the increase of incomes primarily from labour activities.’ The idea of ‘traditional family values’ thus appears to have a stronger economic underpinning that it may appear at first sight and the question of class becomes central if we are to engage with it productively critically.

As part of my research into the role of social class in gender division of domestic labour in post-Socialist Europe  and during my 2017 fieldwork in St.Petersburg I interviewed 13 heterosexual dual-earner working- and middle-class couples with children about their division of labour. It was striking to discover that for many of my respondents, drawing on the ‘traditional family values’ discourse was primarily a way of making sense of their household’s economic/class position – and only secondarily – of their patterns of gender division of labour. For members of working class and downwardly mobile middle- and lower-middle class households, whose material situation has tangibly deteriorated over the 2010s, the idea that they at least lived up to ‘traditional family values’ provided them with a sense of value that they could no longer derive from their economic status. For example, one woman who was working as an nanny (after losing a comparatively well-paid office manager job in a small-sized foreign company) continuously emphasised how she was better at taking care of her daughter than the woman working in a foreign car factory who paid her to care for her son. Middle class participants with stable incomes and those upwardly mobile, instead, either openly ridiculed ‘traditional family values’ ideology (as a project of political elites that had nothing to do with the reality of their everyday life) and/or considered ‘traditionalism’ as a characteristic of other social groups (those from the ‘rural areas’, ‘smaller towns’, ‘uneducated’, ‘religious’, etc.). Explaining their gender division of labour, both men and women from such families also tended to draw more on the ‘degraded housewife’ discourse. Introduced by Putin back in 2006 – at the peak of Russia’s economic development and middle-class expansion – this discourse was a mix of neoliberal and socialist ideas about empowering women through paid work. Hence, the results of my fieldwork have further convinced me about the need to analyse ‘traditional family values’ ideology through a class lens.

What I have found is that gender ideology of ‘traditional family values’ thus serves not only to mark the difference between Russia and the ‘liberal West’. It also becomes a source that ordinary Russians can draw on in their attempts to make sense and come to terms with economic inequalities in the country without actually using the language and lens of class. Without class analysis, however, it is almost impossible to engage in conversations about the roots of those inequalities and ways to address them, which obviously lie beyond the boundaries of individual families.  As long as public debates continue revolving around the issues of morality and values of individual men and women, Russian elites will be able to keep pushing forward their neoliberal agendas.

[i] The title and initial idea of this blog post was broadly inspired by Nancy Lindisfarne and Jonathan Neale’s article ‘Gender for the 99 per cent’. 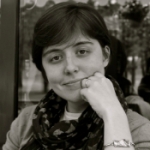 Daria Ukhova is a PhD candidate at the Bremen International Graduate School of Social Sciences (Germany) and was a visiting PhD fellow at the LSE Department of Gender Studies in autumn 2017. Daria’s thesis examines transformation of gendered division of unpaid work in post-socialist Europe from a class perspective. Prior to starting her PhD, Daria worked for several years in various research and policy roles for Oxfam GB and WHO-EURO. She tweets as @DariaUkhova.

Bad Behavior has blocked 370 access attempts in the last 7 days.