Until recently, there were no gender panics in Serbia. We had our own little panics about local culprits, scapegoats and traitors, targeted mostly at anti-nationalists and anti-war activists, many of which were indeed women and some self-declared feminists. The so called ‘homosexual agenda’, a Serbian precedent of ‘gender agenda’, has been to a certain extent discussed among a few die-hard academics and gay panics were in the air around each, successful or unsuccessful, Pride March for more than a decade (see image). But, at the same time, the official policy encouraged embracing ‘European values’, which were supposed to tame the brutes from the Balkans and to teach them tolerance, human rights and politically correct behaviour. When Europe began to redefine its values and East-European style populism came to replace the old nationalist rhetoric, new forces began to appear. Anti-Gender would become one of their catchphrases. 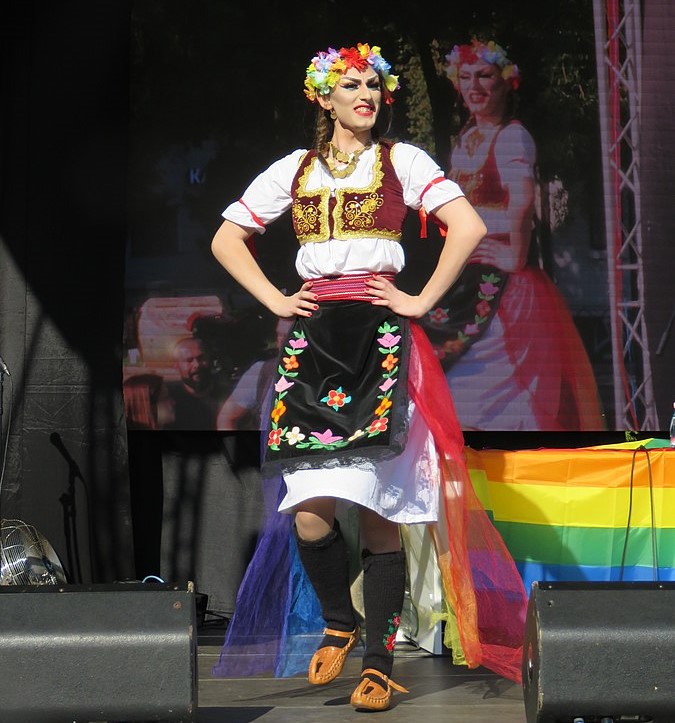 In April 2017 these forces became particularly tangible around an education package on the prevention of sexual violence in kindergartens and schools. This was possibly the first battlecry against ‘gender ideology’, or Dženderizam,[i] which from then has continued to reverberate throughout the public.

Who wants to prevent sexual violence?
Incest Trauma Centre – Beograd (ITC) – is a Belgrade-based NGO, established in 1994 that provides psychological support to children and women survivors of sexual violence and works in close connection with other key women’s, LGBT and feminist groups in Serbia. In 2009 ITC rearticulated its strategic identity of focusing on sexual assault prevention and gained formal recognition as such by the Ministry of Social Policy in 2010. At the same time, the Council of Europe appointed it as the official national partner in the Campaign against Sexual Assault for the Republic of Serbia. Work on the education package began in 2014: in 2015 the first National Study of the Prevalence and Incidence of Childhood Sexual Assault was presented during two public hearings in the Serbian Parliament, organised in partnership with the Women’s Parliamentary Network. ITC further led public discussions in 11 cities and in close cooperation with the Ministry of Science, Education and Technological Development. In November 2016, ITC and the Ministry representatives jointly presented the final version of the education package, a hefty volume authored by 18 teachers, three representatives of the Ministry and seven experts in the field of violence against children and women.

The education package aimed at preventing various types of sexual violence against children and minors (with contents adjusted to age), instructing teachers how to approach issues of body image, sexuality and wanted and unwanted physical contact, how to advise youngsters in case of sexual and gender violence, how to identify adults whom they can trust, and how to prevent or stop violence that they are exposed to. The package was conceptualised as a series of answers to questions raised by children and minors themselves (62% of the contents had been piloted in kindergartens and schools).

In other words, a long-standing and internationally-recognized NGO conducted thorough research and consulted relevant international and national documents in continuous cooperation with governmental bodies. All their actions were public, organized and implemented with the knowledge and support of the parliament and the respective ministry. And all seemed to be going smoothly, until April 2017.

‘Homosexualism’ falls off the back of a lorry
Slobodan Antonić, renowned conservative sociology professor, raised the alarm with a text published on April 11 on an obscurantist Russian-Serbian website. He accused the package of the sexualisation and pathologisation of children and of committing surreptitious violence against children in the name of preventing that very violence, referring to a sentence “my body belongs to me”. Pedantically quoting the text of the package, he then ‘revealed’ that ‘our children’ would get to know, with the shameful blessings of an obviously inoperative Ministry, what consensual sex, French kissing, oral and anal sex and masturbation are. “But why”, he asks sardonically, “stop there? Will our children soon also learn about SM, sex with animals, necrophilia, group sex, swinging and other kinds of ‘normal sexual activities’ which are perfectly fine if they are, according to our Ministry, a matter of ‘consent between persons making love’? Who gives them the right to do that?” The punch-line follows: the so-called education package on sexual violence is nothing other than propaganda for homosexual relationships. The proof, he suggests, is not only an illustration showing three couples kissing (a boy and a girl, two boys and two girls, on page 348) – which would in days to come accompany all other articles on the topic with ominous subtexts – but also the fact that the ‘authors of the book’, i.e. the two representatives of ITC, are themselves lesbian.

Two days later, another representative of the Serbian academy wrote a non-academic piece in the respectable daily newspaper Politika. Unlike Antonić, the author invokes well-known paradigms without properly referring to the package itself: the nation is waning, the white plague[ii] is upon us and the already shaken family is rendered even more vulnerable. The package is purely an instrument in the struggle for the “promotion of homosexualism [sic!] and pornography” (“circa 50% of the material promotes homosexualism and pornography”), using a well-known ‘leftist’ manipulative tool, the gender/sex distinction, to encourage children to experiment with their sexuality, to despise religion and indulge in masturbation as something natural and necessary. The number of authors of the education package is now skillfully shrunken to only one, disparagingly labelled as lesbian. The article concludes in a belligerent tone. The author of the piece (who ironically is the director of the Institute of European Studies in Belgrade) proclaims that his Christian and national rights, guaranteed by the Constitution, are now under attack in the name of gender violence. It is only to be expected, he proclaims, that this would provoke righteous (national) rage.

‘Gender Ideology’ goes public
Five days later, the Serbian Sputnik News Agency published a piece on the controversial package conjuring “a number of public figures, sociologists, psychologists, political scientists and politicians who believe that an assumed prevention of sexual violence… turned into a declaration of war against the family and family values, and into propaganda of LGBT and gender ideology”. Here, these two small interventions were blown up and falsely framed as a significant number of reactions. Sputnik added a third crucial dimension by consulting the most prominent conservative expert on family matters, who would become the first to argue that the Ministry was in fact manipulated – an argument that would soon come into frequent use. One should actually blame an interest group that aims at tearing the fabric of the society, cleverly using children who would grow up to become utterly foreign to our own cultural and national identity. This uncritical importation of ways alien to us, the text suggests, is what social engineering is all about and one could only speculate who would have an interest in paying for an unstable Serbian family and, in the long run, an unstable and easily manipulated Serbian state.

After only three articles scattered on the web, we were now apparently dealing with foreign Western lobbies that financed an education package in order to make us swallow radical individualism, extreme feminism and totalitarian LGBT and gender ideology. Over the course of just ten days, the anti-gender campaign was in full rage. The war on family values transformed into a war against the education package. On April 21 the new Minister of Education confessed that ‘Europe’ was demanding sexual education and to appease the raging public promised adjustments to the existing text. But the following day Politika boastfully announced the revocation of the package, the formation of a new team (that would listen less to Europe and more to what we really need and want), happily referring to its own contribution to this fruitful ‘public discussion’.

In these two weeks, at least eight counter-reactions ‘in defense of gender’ ensued, some of which defended the packages, while others questioned ‘Serbian family values’ or attempted to define, yet again, gender and to unfetter it from an imposed and imported ‘ideology’. They, however, seemed not to belong to the public proper: there was no discussion between the opponents and the adherents whose voices were silenced by the media pomp and brisk governmental action. Playing, as always, on the ambivalence to what we will or will not do, despite the fact that ‘Europe’ demands it, the officials stifled the rage and let it pass. No news about the new packages appeared until now but the extent of the violence has, needless to say, not diminished. The only thing certain is that gender ideology began to circulate in Serbia as a useful phrase that can be re-used any time when the circumstances allow (one very recent example is a debate on a new draft of the Law on Gender Equality). The sad news is that the circumstances multiply, both at home and in Europe more generally.

This piece is a revised version of the text ‘Habemus gender: The Serbian case’, originally posted on Feministiqa and is re-posted here with permission. This blog post is part of a series of posts on transnational anti-gender politics jointly called by the LSE Department of Gender Studies and Engenderings with the aim of discussing how we can make sense of and resist the current attacks on gender studies, ‘gender ideology’ and individuals working within the field.

Adriana Zaharijević is a research fellow at the Institute for Philosophy and Social Theory at University of Belgrade and an assistant professor of gender studies at the University of Novi Sad.

[i] Dženderizam is a derogatory word used for gender theory, gender equality or any other domain where the term gender is deployed. It functions similarly to genderism or Genderismus. Unlike some other European languages, such as German, in Serbian there is a word for gender (rod), used by scholars and policy-makers alike. The use of disparaging dženderizam emphasizes foreign origin of the phenomenon of gender in ‘our’ culture.
[ii] White plague (bela kuga) is an expression widely used in Serbian to refer to the birth rate dropping. The origin of the expression is unknown, although it may refer to ‘black death’ (plague). The shrinking of the nation due to the lowering levels of births (accompanied by abortion panic) is as deadly as plague, but even more perfidious, and therefore possibly white.

Bad Behavior has blocked 370 access attempts in the last 7 days.