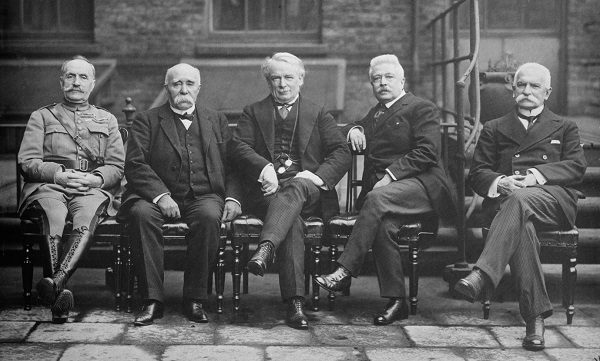 French, British and Italian ministers at the Paris Peace Conference. Photo: the George Grantham Bain collection at the Library of Congress.

The faces are clean-shaven, the top hats are gone, and the photos are in colour, but the signing of the Dayton Peace Agreement in 1995 had one major thing in common with the Paris Peace Conference in 1919–20 besides its participants’ power to turn maps of ethnic majorities into internationally recognised borders: all the figures around both negotiating tables were men.

At the workshop on Integrating Gender into Historical Research that History PhD students at LSE invited me to join earlier this year, this was a dilemma for diplomatic historians approaching gender for the first time, especially those researching periods when diplomatic services were closed to women: what do you do when all the individuals in your sources are male?

There, of course, is precisely where you start. 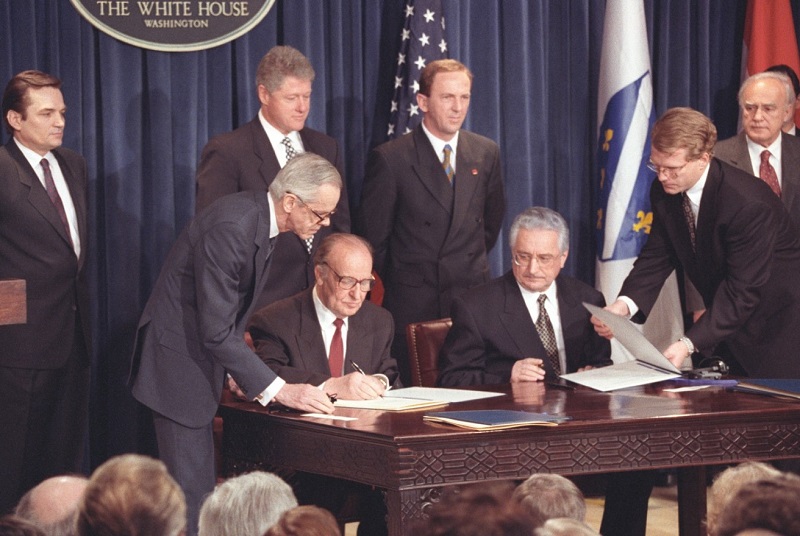 First, as four decades’ worth of feminists researching international politics have learned from Cynthia Enloe, scholars can ask where the women were. Behind the scenes of those ceremonial photographs from Versailles, for instance, how did the conference depend on women’s work?

Gender analysis reveals the maids who maintained the diplomats’ palatial spaces, the laundresses starching those collars, the entertainers they watched at night and the sex workers some of those men on business in Paris would undoubtedly have hired – not to mention the women’s movements lobbying to be involved in peace-making, or the wives who affirmed married diplomats’ senses of self as men with the authority to decide which nation-states and empires should rule over which people’s lives. And while the Dayton agreement lacked women’s voices, it was largely through ex-Yugoslav women’s mediation as interpreters that its male signatories made themselves heard.

Gender analysis shows historians they can question what factors made women so absent in their sources or the institutions that generated them, and what other sources might show women’s participation in diplomacy, war and peace.

But studying gender is more than a matter of ‘add women and stir’: historically-situated ‘regimes’ of gender, entangled with other systems of social identity and power, are frameworks that all individuals negotiate as embodied selves, and ideological structures for the institutions where diplomacy and all other human activity takes place.

Using ‘masculinities’ as a tool of gender analysis opens up even all-male institutions – perhaps especially all-male institutions – to a ‘gender lens’. How did norms of ‘manly’ conduct and behaviour, and taken-for-granted notions of authority and leadership as masculine domains, influence how diplomatic men framed and approached the Paris or Dayton peace conferences, and how could we read that from the documents they left behind? How were their imaginations of how states themselves related to each other gendered? How did perceptions of different national and imperial masculinities influence how negotiators related to each other or made territorial deliberations, and what embodied performances of national masculinity did they make themselves?

Setting diplomatic masculinities in the full context of coloniality, nationalism, territory, violence and identity in the 20th century, of course, requires seeing how those masculinities were simultaneously racialised. To the ‘Council of Four’ and their aides at Versailles, it seemed natural to enshrine ‘national self-determination’ as a geopolitical principle in Europe while denying it in the Middle East, Africa and Asia; and the ideas about civilisation, morality, hygiene, bodily normalcy and cultural reproduction that made that double standard feel natural were imbued with interdependent colonial constructions of gender, sexuality and ‘race’.

Besides what gender analysis can reveal in historical evidence, the fact that historians’ own gendered experiences have already formed them as scholars means that gender is always already present in analysing the past.

Women, and trans people whether they are women or not, have had to be more conscious of gender than most cisgender men, socialised not to perceive the sexist and patriarchal structures that put their experiences at the centre of the story. Race and other systems of oppression interlock with gender and sexuality to shape what individuals perceive and fail to notice: as a queer white woman, during my own History degree at LSE, I asked myself many queer students’ question of ‘Where might there have been people like me in the past?’, which led me into feminist International Relations and its study of gender and war – but whiteness stopped me noticing race, which would not have been the case in the same country for a queer woman of colour the same age.

The very skills of critical thought needed for historical and social research, nevertheless, equip (or should equip) scholars to see beyond their own positionality: one can ask what Joan Scott, Susan Stryker or Angela Davis would have said about one’s evidence without having to have lived the life of Angela Davis, Susan Stryker or Joan Scott.

Part of the actuality of integrating gender into historical research stems from the questions scholars bring into their research agendas from the rest of their lives – all the more so when feminist thought is part of their life already. My own ideas, and even terminology, for understanding my own embodied history of gender non-conformity and non-normative desire have been vastly expanded because of the transformations in queer politics and queer expression that have taken place in my lifetime; I would not have started questioning south-east Europe’s position in the global politics of race if not for the digital feminism of the 2010s. Flavia Dzodan’s writing on the coloniality of securing the borders of ‘Europe’, for instance, first made me question whether south-east European nationalisms’ aspirational ideas of ‘Europe’ also contained identifications with coloniality and whiteness even though these nations had been imperial subjects, not imperial rulers, in the past. Postgraduates and more established researchers, reading popular works that expose the global and the intimate pervasiveness of structural racism, or the past and present complexity of gender variance, are all the more likely to be driven to address such questions in their own research.

But another dimension of the actuality of integrating gender into historical research stems from the actuality of the politics that surround us – what future scholars will call the historical context of how gender was being struggled over in our own time.

Already a target of right-wing press campaigns and organised online harassment, gender studies teaching and research in several countries is now under direct government attack. Hungary’s prime minister Viktor Orbán, for instance, has made George Soros (the founder of Central European University in Budapest) the scapegoat for everything that Orbán’s populist ideology imagines to have dragged Hungarian national greatness down – including multiculturalism, solidarity with Muslim refugees, feminism, and queer and trans liberation.

All these are important research themes for CEU’s gender studies department, a world leader in researching the connections between postsocialism and postcoloniality. Early in 2016, I visited CEU to hold a workshop on race and whiteness in south-east Europe which had a decisive impact on writing Race and the Yugoslav Region later that year, and also gave a lecture on the politics of LGBTQ rights and ‘European’ belonging in the Eurovision Song Contest. A future historian researching the Orbán government’s confrontation with CEU might use both those events, among many other activities, as evidence of the postcolonial and queer gender scholarship it since has tried to repress.

Orbán’s government has tried to shut down CEU for more than a year, taken control of the Hungarian Academy of Sciences budget (just before a pro-Orbán magazine published a list of social scientists doing Academy-funded gender and sexuality research, exposing them to harassment and implying they did not deserve to be funded by the state), and this summer proposed to ban gender studies degrees in Hungary entirely. A Bulgarian research team, meanwhile, reported that the Bulgarian Academy of Sciences and education ministry had blocked their project on gender equality in education from a UNESCO funding programme, while right-wing media accused them of trying to introduce a ‘third sex’ into schools.

These are national manifestations of the transnational ‘anti-gender’ movement. Gender scholars across central and eastern Europe are already familiar with being called Soros’ lackeys or mercenaries when they challenge patriarchal ideals of gender and family or criticise genocide denial. The same triangulation may now be confronting feminist, queer and postcolonial scholars doing the equivalent work in the UK of unsettling hegemonic and right-wing ideas of gender, nation and race. In February 2018, the Daily Telegraph ran a front page accusing Soros of bankrolling a secret plot to persuade British voters to reject Brexit, a frighteningly anti-Semitic conspiracy theory to be on the front page of even a conservative national newspaper, implying Soros was exerting a sinister influence over society to turn it away from what it should ‘naturally’ believe.

Among anti-trans campaigners organising on Mumsnet, a few have argued that Soros’ Open Society Foundation, which has published briefs on young people’s access to gender recognition, is responsible for forcing schools to teach about trans equality. The arguments of the UK Independence Party’s children and families spokesperson that educators teaching primary school children about trans people are ‘messing with young minds’ are in essence the same discourse that persuaded the Russian Duma to criminalise the promotion of ‘non-traditional sexual relations’ to under-18s in 2013. The spaces through which people and organisations committed to anti-gender politics learn from each other across national borders are sometimes public and formal, as with the recent World Congress of Families held in Moldova (where organising against trans rights was a major theme). Often, though, they – and the movements they oppose – are part of a shifting online terrain that future historians will have to recover using whatever platforms and data will have survived deletion, obsolescence and surveillance, processes that might yet make the digital record even more fragmentary than paper archives of the past.

This international anti-feminist and anti-queer mobilisation against ‘gender ideology’ as a pillar of today’s racist populism makes gender scholarship all the more contentious – especially gender scholarship that reveals how gender and other systems of oppression have been intertwined. As scholars, writers, learners, or simply as embodied selves, we are the stuff of tomorrow’s gender history – and the findings and conclusions of our own research, about international history or any other kind, will be part of future historians’ evidence about how gender was contested in our own times. 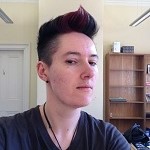 Catherine Baker is Senior Lecturer in 20th Century History at the University of Hull. She specialises in feminist and queer approaches to nationalism, ‘militarisation’, and the cultural history of war, especially in the former Yugoslav region and the UK. She graduated from LSE (BA History) in 2003. Her most recent books are Race and the Yugoslav Region: Post-Socialist, Post-Conflict, Postcolonial? (2018) and an edited volume on Gender in 20th Century Eastern Europe and the USSR (2017). Her articles have appeared in European Journal of International Relations, International Feminist Journal of Politics and elsewhere. She blogs at http://bakercatherine.wordpress.com and tweets at @richmondbridge.

Bad Behavior has blocked 415 access attempts in the last 7 days.