Sexual violence against men: enabling disclosure in the face of denial

Sexual violence against men: enabling disclosure in the face of denial

Last September, I presented at the UN in Geneva a report called Unsilenced, an analysis of the testimonies of 121 survivors of conflict-related sexual violence from Sri Lanka. The 121 men fled to the UK from Sri Lanka; all of them struggling with being so far away from family and home, and even more with the legacy of the sexual abuse by various state security forces they had endured. The report demonstrates how sexual violence against men, which includes forced nudity, genital mutilation, rape, forced masturbation, coerced sexual acts, enforced prostitution and sexual slavery, has been and continues to be part of an institutional policy of the state security forces in Sri Lanka. Indeed, a large number of these abuses occurred under Mahinda Rajapaksa’s period in office, and it could again become more frequent after Rajapaksa attempted to seize power on October 26. 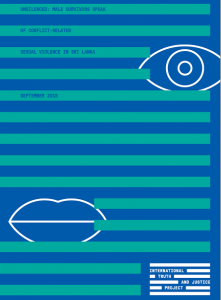 It is often said that men will not disclose sexual abuse because of stigma. Because men don’t talk, advocacy groups cannot work on the issue and the stigma remains unchallenged. This bring us full circle: the issue is silenced and there seems to be no solution at hand. The testimonies I studied for the report, collected by the International Truth and Justice Project (ITJP), however, were highly detailed. Many victims discussed what had happened to them at length and wanted the world to know of their experiences. This challenges common perceptions and demonstrates that men do talk. Based on my analyses of ITJP testimonies and further research, I highlight a number of false assumptions about (male) victims of sexual violence and reflect on how we can break the silencing process.

False assumptions
A first step is to investigate the role of stigma more closely. Whilst powerful stigma does exist, considering it the main and only explanation of the lack of disclosure is too simplistic. Indeed, such reasoning tends to ignore important contextual and cultural differences, overemphasizes the victims’ lack of agency while also downplaying the role of those who (can) listen. Similarly, there is also a strong assumption that the disclosure of sexual violence is a one-time and one-way event. I can tell you, it is not.  Disclosure happens over time and is a dialogical by its very nature, and requires an empathetic and understanding listener. In the case of male survivors, it requires someone who is aware that sexual violence against men happens regularly, knows about the impact of trauma and who is moved but not overwhelmed when hearing these stories. Additionally, the person needs a good knowledge of the context wherein the abuses occurred and the stigma associated with sexual violence. This requires some experience and training. One of ITJP’s witnesses acknowledged that it was the experience of one of the investigators that helped him decide to disclose his sexual abuse:

I did not tell the Home Office about being sexually abused nor my female solicitor. I also feared that if I told anyone, then my sexual abuse would become known in the Tamil community in the UK. In our Tamil culture others look down on people who have been sexually abused. I have decided to tell the investigator as he is not Tamil and an international who has great experience dealing with survivors of sexual abuse and had a strong understanding of Sri Lanka Tamil culture.

This witness statement also raises important questions about the role of gender in disclosure. Indeed, the witness suggested that he did not disclose to his solicitor because she is a woman. Although, it is often believed that men will only disclose to other men, my own experience during a focus group with eight male survivors showed that this really depends on the individual. The investigators corroborated and told me that while some men did indeed request a male investigator, others said they felt more comfortable with women.

Taking all this into account, how then can we facilitate the disclosure of sexual violence?

Creating safe spaces
Two very important conditions for disclosure are that survivors find themselves in a safe space to disclose and that they have psycho-social support available and further follow-up. The issue of safe space, free of judgement, is extra relevant in the Sri Lankan case, as it partly explains why, to date, sexual violence against men has only been documented sporadically inside the country. Almost all of the reports that detail sexual violence against men have been based on testimonies taken elsewhere. In Sri Lanka, the taboos on sexuality and sexual violence are very strong. Both women and men who disclose sexual abuse are stigmatized, considered spoilt and cannot get married anymore. Most people do not dare to tell their families. ITJP Witness 158 said: “These are not things you can say to your wife. You do not talk about these things in my culture and she would be worried and upset.”

Inside the country, there are no safe spaces where survivors can disclose: there are hardly any organisations that work with (male) sexual violence survivors. Doctors who suspect their patient is a torture victim are required by law to inform the police and, sometimes, police are even present during medical examinations. The law does not provide for adequate remedies either. The definition of rape does not meet international standards: only women can be victims, and men only perpetrators. Rape is further delimited to only penile-vaginal penetration. Justice is hard to come by for victims who have the courage to file a complaint. A female victim waited for 14 years for a verdict in her case.

All of these issues have allowed for and reinforced the blanket denial of sexual torture by the security forces and the government. The silence is in fact written into the act of violence, or as Inger Agger and Soren Buus Jensen wrote in the context of torture in Chile: “It is an integral part of the torturer’s choice of methods, when the story is told, no one is going to believe it”. Even at the presentation of the report in Geneva, the reactions from some of the attendees demonstrated the depth of the denial of sexual crimes against men. The questions they asked were attempts to deflect from the substance of the report: “What about Tamil terrorism?”, “Why don’t you bring a case against Indian peacekeepers?”, and “How about Sinhalese who are victims of similar crimes?”

To create space for victims to speak and to document the abuses is, therefore, an act of resistance in a time where human rights abuses are on the rise and increasingly condoned. A resistance not only against the blanket denial by the government but also against our own psychic numbing in the face of atrocity.

Additionally, documenting and leaving a paper trail can be a form of justice for survivors as it provides them with the opportunity to feel a certain recognition of their victimisation and suffering. The men I talked to during a focus group in London said they wanted to talk about the sexual abuse they suffered so that the truth would be known. As Stanley Cohen writes in his well-known book States of States of Denial: “People do not necessarily want their former torturers to go to prison, but they do want the truth recognized.” A final step in the process of overturning denial is when the truth “becomes officially sanctioned and enters the public discourse”. For this final step we may have to wait for a long time. In the meantime, human rights defenders and others are active listeners, provide safe spaces and document what is being said by survivors. They deserve our support.

Dr. Heleen Touquet is a researcher and lecturer at the University of Leuven, Belgium. From March until July 2018 she was a visiting fellow at the Centre for European Studies at Harvard University. Her research about conflict, reconciliation, mobilisation, conflict-related sexual violence and gender has been published in various peer-reviewed journals. She is currently working on a project on sexual violence against men during the conflict in Bosnia and Croatia.

Bad Behavior has blocked 1103 access attempts in the last 7 days.