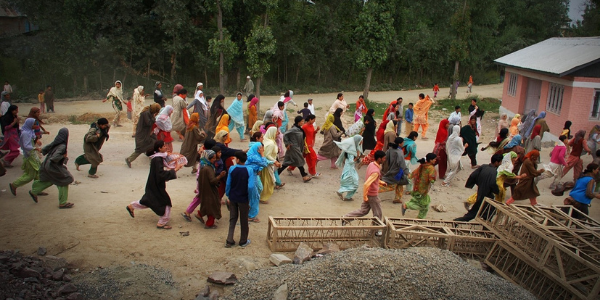 Photo credit: Showkat Nanda from Watergam, Baramulla, 2009. Republished for this post with permission

On 23 February, 2020, over six months into fast pacing settler colonialism and imposition of a communication blackout by the Indian state in and over Kashmir, an anonymous collective of Kashmiri women by the name of Zanaan Wanaan (Kashmiri for ‘Women speak’) came out with a Kashmiri adaptation of the Italian anti-fascist song Bella Ciaó, originally sung by women peasants in Northern Italy. ‘Waliv wathiv, zaelim chhu kadun,; the song begins with an imperative opening (Come, get up! We have to throw out the tyrant). The women go on to sing of remembrance, the collective struggle against enforced forgetfulness and for Azaadi (freedom) that Kashmir has been engaged in for decades; first against oppressive regimes including the Dogras and then the Indian State since 1947.

In only a few verses, the song traverses a long history of oppression in Kashmir marking particular days as the resistance struggle remembers them: from the 1931 rebellion and killing of 22 Kashmiris to the region’s contested accession to India in 1947, the Konan Poshpur mass rape of 1991, the Sopar massacre of 1993 by Indian forces. It locates the varied markings on Kashmir’s wounded, collective body – bullets, pellets, teargas, as also the chronicling of the August 5, 2019 siege. And Azaadi! It evokes memory and emotion, bringing together grieving and resistance in the lyric. “We wanted to write our pain in Kashmiri, as we couldn’t express it in any other language, we wanted to use raw Kashmiri words,” the women of the collective shared in an interview.

The song was written, as the collective says, on ‘an odd night, away from home, in the aftermath of August 5’ when Kashmir was made invisible to the world. ‘Doh raat gov kunui Garich ne khabri,’ the song goes on. Our days and nights have become one, No news of home! These lines are a haunting motif of the governmentality of suffocation and people’s refusal to be silenced. In many ways, it is fragmented and underexpressed but has a visceral impact on those of us who were away from Kashmir at the time, dealing with anxieties of what would have become of our people and homeland. There was no way to find out, but being aware of the everyday violence of the Indian state in Kashmir, the loss of communication only triggered inexplicable panic and made rumours of casualties more believable.

Especially symbolic was that the song was released on February 23, marked as Kashmiri Women’s Resistance Day. On the intervening night of 23-24 February 1991, over 30 women were subjected to mass rape in their homes by soldiers of the Indian Army during a cordon and search operation in the twin hamlets of Konan and Poshpur in Kopwor to the north of the capital city Srinagar. Three decades later, the mass rape case, much like other forms of human rights violations in Kashmir, remains embedded in the Kashmiri collective memory as a part of state violence over and control of Kashmir, and of the injustice that undergirds its rule over Kashmir.

On August 6, 2020, Zanaan Wanaan released another song, this time ‘a prayer and call for revolution.’ Duaekhaer-e-inquilaab: Kashmiri Protest Prayer starts with an emphatic statement on the screen, Waqt chhu gawah. Time is witness. The rendition, the women state, is inspired by Bouba, a name used lovingly for an elderly woman in Kashmir. As the women sing inquilaabuk karwaan – the caravan of the revolution, asking if we remember the women ‘who fostered the movement with the furnace’ – the video shows some women engaged in making graffiti of a caged Kashmir. The song ends on a powerful note with Bouba’s duaekhaer, asking God to throw Indian soldiers out and bestow Kashmir with freedom, and to bring political prisoners safely to their homes. It brings together different generations of Kashmiri women in a collective cry; beginning with young women, and ending with the benediction of the elderly. This coming together is also symbolic of collective resilience, of the long history of Kashmiri women’s camaraderie and resistance to the Indian state. These songs constitute an ongoing conversation that builds on past repertory, and yet is “never detached or distant from the lives and experiences of contemporary actors,” as David McDonald (2013) argues in the context of the poetics of Palestinian resistance. 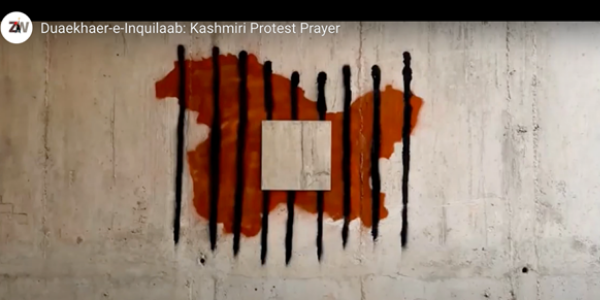 In recent years, a surveillance capitalism industry has come to thrive where we see modern states coming together with big tech to ensure surveillance of digital spaces, censorship and punitive response to people’s articulations of dissent. However, people in these spaces have variously found ways to subvert state dominance. One does acknowledge that songs like the ones by Zanaan Wanaan are restricted to the internet-using group of people. However, at this alternate site of war and digital militarism, there is a centeredness of voice and agency that attempts like these demonstrate. They operate on their own terms and allow relegated subjects of state power to restore their agency and substitute hegemonic discourses, for example the narratives promoting India’s August 5, 2019 decision as grounded in women’s empowerment, or portraying Kashmiri women as forever-voiceless victims, or having been misled and misguided. As a challenge to this snatching away of Kashmiri women’s agency and erasure of their lived experiences, then, oral narratives from Kashmiri women themselves, as they appear in digital spaces, reject the ‘favour’ of being placed at marginal positions at best. Around the world as people battle oppressive regimes, the digital space also becomes a site to speak to each other’s struggles and envision transnational solidarity.

In Kashmir, these songs go alongside everyday modes of unmasking India’s violence and Kashmiris’ desire for freedom. The Kashmiri protest song of Azaadi has, for decades, been a symbolic assertion of people’s collective aspirations and is very much a part of the everyday lexicon. Funerals of people killed by armed forces witness these verses coming out as a scream, in chorus, in fearless defiance. Even wedding songs take a different meaning, layered with the stories of love, loss, and longing that violence has brought about. As Uzma Falak puts it, women’s songs in Kashmir form a significant repertoire of resistance. When Kashmiri women sing, it seems like ‘everyone’s loss and mourning had survived a body search, crossed a certain checkpoint, a certain border, and were now in an assembly; each articulation was distinct yet coalesced into an ephemeral collective, manifesting itself into a longing and a cry.’ In the affective realm, these songs produce a sense of oneness, as the women chant them in chorus, reflecting a conscious strategy of merging of the personal and the political. They also enable production of anticolonial knowledge that is not only outside the existing sites of knowledge production, but one that challenges hegemonic cultural production.

In response to the Indian state’s multi-layered violence in Kashmir, from bodies and spaces to psyches and memories, oral storytelling has been a powerful weapon of resistance. In telling their own stories, not only do women challenge dominant modes of knowledge production where they have primarily been spoken for and on behalf of or even taken out of their own story altogether, but they also reconfigure their agency from the margins to the centre. To borrow from Mahfouf and Al-Shetawi (2019), these oral narratives ‘evoke the past and reinsert it in the present’ such that the Kashmiri voice is freed of any epistemic and discursive manipulations by the Indian state, intending to transcend a reality that cannot be found in statist versions of the ‘truth’. For years, Kashmiri women have found themselves represented as the exoticised, fixed Other, a colonial obsession where they require saving. Not from a violent state, but from the barbaric Kashmiri Muslim man, who in the Islamophobic-hypernationalist imagination requires to be disciplined and from whose dangerous, radical ways both the State and Kashmiri women need saving. And it is this discourse that has largely dominated knowledge production in academia as well, where in a cyclical manner, this Other is re-inscribed in ‘dominant representations of powerlessness’ that perpetuate its constant marginal positioning and putative inability to speak for itself. In this context, oral narratives and songs serve as a powerful counternarrative to enforced silencing as well as a claim to one’s history, the present and future aspirations. The voice that these songs echo reflects both the individual and the collective, at the intersection of the personal and the political, as it rejects being spoken for and being framed in a language familiar to the oppressor.

Witnessing, remembrance, writing down, and performing of these songs by women constitute an act that Bromley (2015) refers to as memory-making where they construct the present for a historicised remembering while articulating the possibilities for a future commemoration. This is not to argue that in an everyday battle of life and death that Kashmiris are engaged in against the violent militarised structure of the Indian State, these songs become a centre of resistance. Nor can they be compartmentalised as an expression divorced from the socio-political environment in which they are articulated, or an erasure of the women and men who have been killed or continue to be jailed for resisting the state. Rather, they emerge as an alternate site of telling and re-telling these stories to challenge the narrative warfare of the Indian state, a radical counterculture in response to its colonial savior narratives and by extension Bollywood’s exotic depiction of Kashmiri women.

In recent years, the chant of Hum Kya Chahte? Azadi! (What do we want? Freedom!) has found expression in several protests across India, often used as a demand for Azaadi within and not from India. However, for Kashmiri women, who defiantly sing these militant verses in weddings and funerals, protests and during everyday conversations, it predominantly means a constant rejection of the Indian state in a resistance struggle where they participate alongside Kashmiri men to demand freedom. To quote Uzma Falak,

Do not exorcise us out of our songs. Our songs are not just our protest songs. These are our birth songs. Our death songs. Our wedding songs. Our funeral songs. Our lullabies. Our mourning. Our celebration. Our screams. Our silence. Our malady. Our panacea. Our unwritten history. Our militant memory. 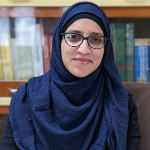 Samreen Mushtaq is a Research Fellow at the Centre for Studies in Gender and Sexuality, Ashoka University, India. Her work focuses on gender, militarisation and everyday forms of violence in Kashmir.

Bad Behavior has blocked 582 access attempts in the last 7 days.