Feminist Movements Around the World: Creating feminist community during COVID-19

Feminist Movements Around the World: Creating feminist community during COVID-19

When I decided to come to London to do my masters in the middle of COVID-19 pandemic, I knew it was going to be hard. A big reason for why I chose LSE was the international community that characterises this university: I was excited to learn about feminist politics from all over the globe and connect with people from different contexts through our shared stories of struggle and uprisings. I thought that, despite all the uncertainty and downsides of 2020, building transnational bridges of feminist solidarity was still going to be part of the master’s experience.

But, like many, I underestimated the extent to which COVID-19 disrupted our plans. For international students, the process of arriving in London was incredibly hard. That is why when I found out that many of our classes were asynchronous or had been cut to half the time, and that a new lockdown was on the way, I felt alone, angry, disappointed and scared. How could that imagined feminist community emerge in such a context?

Of course, I was not the only one thinking this. Soon WhatsApp groups began to flourish in which projects and ideas started being circulated in response to the need for creating networks and community; of coming together in an unknown city. Amidst this, I came up with the idea of organising weekly meetings where people could share with others their political stories as a way of reclaiming some of the spaces that we felt we were losing. After sharing the idea and brainstorming with a couple of classmates, at this point it was just about getting together in a relaxed environment to learn from our experiences. 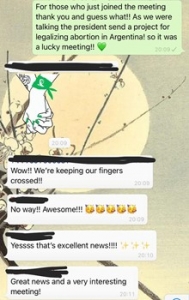 I kicked off the meetings sharing about Argentina’s Green Tide – the feminist movement fighting to legalise abortion. I told my classmates about the movement’s history, its symbols and my personal experience within it. It was not an academic exposition – I just showed photos of activist demonstrations, the campaigns, some featuring my friends and I freezing in the streets of Buenos Aires as we waited for the Congress to vote on abortion law. Through that deeply affective telling, the possibility of a connection through a horizontal space of conversation began to form. Luckily, after finishing that meeting I found out that the Argentinian president had sent a bill to legalise abortion. So, I would like to think that this project started with the much-needed hope that feminist uprisings bring social change. Although being away from home in such a historical moment was hard, I could begin to feel the apañe[1] of my new compañeras.[2]

After this first powerful encounter, we decided to keep meeting weekly.[3] The dynamic was simple: each week, someone prepared a presentation about a specific movement or social uprising in their home countries. This was followed by a moment for questions/answers and exchange of experiences. Beyond this, there was something that all of us desperately needed: a space where time is not a commodity or where discussions are not bluntly cut by milimetrically-programmed timetables. Such availability of time, perhaps, allowed creating a space where people felt comfortable, safe, and sheltered. A space where ideas could circulate, where we could go out on tangents without thinking we were not following that week’s class topic. Feminist Movements Around the World (FMAW) became the fixed plan for Tuesdays (then Wednesdays). When possible, people even got together to have a few drinks or dinner and watch the presentations. It became a moment that many of us looked forward to, especially after the announcement that the rest of the academic year would happen online (thus, for many, in complete isolation). Further, it was the only social space where those who could not make it to London had for engaging with the cohort outside of the virtual classroom. 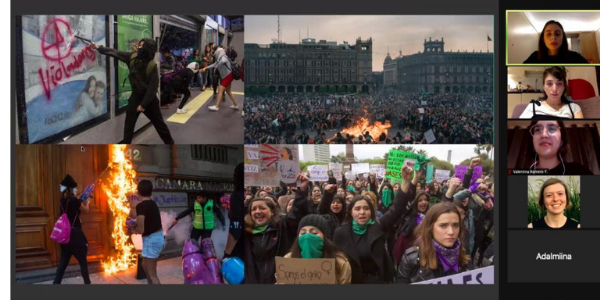 I think I was one of the few people that did not even make it to London during the academic year. It was a hard decision; I was afraid of missing too much and convinced myself that I was going to finish this master without any friends. The weekly meetings gave me a space not only to learn but also to meet people beyond seminars, to properly interact with others without the need to bring something smart to the discussion or to measure my time.

Feminist movements around the world has been one of the highlights of this year for me. Amidst all this isolation, it’s one of the few things that has helped me meet the wonderful people in my cohort. (…) Beyond finding friends, this weekly event helped me learn a great deal about feminism in different parts of the world

Table I: List of presentations done in the context of Feminist Movements Around the World

Another positive aspect of FMAW was that it became a space for people to engage with their own countries from a new perspective. Doing a presentation meant researching, collecting images, and exciting initiatives to share with the group. It meant building a narrative that combined personal trajectories with political movements in an original way. Moreover, especially for those of us coming from the Global South, it was a chance to tell our stories from a different viewpoint. Presenting was a challenge: usually, before committing to share, people would express a sense of uncertainty about not “being an expert” in the subject, never having done a presentation, or being afraid of not being at the level of the previous week’s presentation. What eventually gave everyone the necessary confidence to do it was the shared sense of a collectively constructed safe space.

It was my first time talking about my country, about the story of the conflict and the feminist movements in a semi-formal space. The process of reflecting and looking at images, data, information was very important for me and helped me put into perspective several things that I was studying during the masters

I really enjoyed working with a fellow feminist to expand our knowledge of an area of feminist thought and activism I knew little about (abolitionist feminism). It felt exciting, exploratory and enriching.

Doing a masters in gender necessarily entails inhabiting uncomfortable questions. For me, they appeared in relation to what it means to study feminist issues and politics in an academic space marked by a neoliberal rationality. Although I am grateful to have learned a great deal about deeply critical and radical scholarship, the question about how to enact decolonial and feminist praxis always remains present. Yet again, I am not the only one. Creating this community was my way of overcoming the troubling feeling of over-theorisation that sometimes obscures the wonders of studying a discipline like Gender Studies. In other words, this community was a way of defying the contradictions between the content of what we study (i.e. the ways in which that neoliberal rationality creates the illusion of a self-sufficient individual, and how that idea is tied to patriarchal, colonial, racist and capitalist structures) and the ways in which we do it (i.e. through pedagogies that are constructed upon that idea of individuality, in a highly competitive environment, and since 2020, from the solitude of our screens). Through a collective form of learning that overflowed what we learned in class; we enacted that desired feminist praxis. It might not seem as much, but during this particular year, it meant the world to many of us. And in the end, isn’t it about creating the feminist spaces that we need to transform the environments we inhabit?

Studying a master during a pandemic was a challenging experience; however, these weekly presentations were a breath of fresh air, a safe space to connect, exchange and build bridges. (…) My experience presenting about Mexico was genuinely positive, as I was able to talk about a topic I feel passionate about and discuss different points of views. I am thankful to be part of a fantastic cohort through which I’ve felt sheltered and inspired.

In the meetings I continued to learn a lot from all my LSE colleagues, about myself, my country, and issues I care about, creating feminist community in different ways.

In conclusion, Feminist Movements Around the World is the result of transforming negative and individual feelings into a community that achieved to provide a shelter in which to transform, together, what it means to learn from a feminist perspective. It was a space where the 2020/21 cohort of LSE’s Gender Department put into practice all that we learned and kept challenging those assumptions that support this world we are trying to change. I hope that this short piece opens up reflections about what it means to create feminists learning spaces that we need, especially amidst a dreadful pandemic; and the infinite possibilities of transforming disappointment and loneliness into community. In conclusion, I hope that this helps to build feminist futures and transnational solidarities beyond the classroom.

To all of the wonderful people who joined this community. To those that found in this simple space a way of walking through this difficult year together.

A special thanks to my amigas, definitely the highlight of the year and an incredible source of support, love, ideas and feminist solidarity. 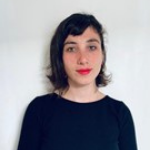 Milena D’Atri is an Argentinian feminist activist and educator. She is an MSc student in Gender, Policy and Inequalities at LSE and has a BA in Educational Sciences from the University of Buenos Aires. As an activist in sexual and reproductive rights and part of the Argentine feminist movement, she has experience in movement-building and network creation. As an educator, she works with feminist pedagogies, sexual education and non-formal educational programmes. She is also part of Colectivo Nuestros Afectos, a research group formed by 5 Latin American LSE students, which researches feminist movements through collective cartographies and affect-telling.

[1] apañe is a Chilean expression meaning “to go with”, to support one another. Many thanks to my Chilean friends who taught me this beautiful feminist expression.

[2] compañeras is untranslatable because it means friends, sisters, partners, allies. It is used to refer to people with whom you share political activism, protests, and other forms of mobilisation.

[3] From here on I use the plural to signal a project that took a collective form.

Bad Behavior has blocked 1185 access attempts in the last 7 days.