A recent music video has reignited the conversation about violence against women (VAW) in México. The video called ‘Fuiste Mía’ (or ‘You were mine’) by singer Gerardo Ortiz has generated a heated conversation about the way men and women are portrayed in the media, and the role media plays in normalizing VAW. The graphic video, which was temporarily removed from YouTube, showed the protagonist played by Ortiz himself tying his partner up, sexually objectifying her, putting her in the trunk of a car, and then setting the car on fire after he discovers she is having an affair. In the video, Ortiz also kills his partner’s lover at gunpoint.

Critics argue that in a country like Mexico where 6 out of 10 women who are 15 years or older have experienced some form of physical, emotional or sexual violence during their lifetime; where 32 percent of women report to have experienced intimidation, sexual harassment or sexual assault; and where approximately 6 feminicidios (defined as the different expressions of violence women face, which violates their human rights, and culminates in their violent death) occur on a daily basis, content like the one in Ortiz’ music video naturalizes VAW and makes criminal behavior seem acceptable (National Institute of Statistic and Geography, 2015; Lagarde y de los Ríos, 2010).

The video, which has placed the discussion of women’s rights and feminism center stage in Mexico, has refueled the movement to address, prevent, and eradicate VAW, what some are referring to as a Primavera Violeta (Purple Spring). This was exemplified by a spontaneous national call on social media that turned out thousands across the country as recent as Sunday, April 24, 2016 to call on the government to increase training and evaluation mechanisms for public institutions in charge of addressing VAW, and for the end of media content that promotes sexist, stereotypical, and violent behavior towards women.

However, despite the discussions and the massive mobilization to eradicate VAW in Mexico, some of Ortiz’ supporters have taken to social media to state that rather than focusing on a fictitious music video, critics instead need to focus on the “actual” problems at stake in Mexico, such as the violence caused by the war on drugs, the lagging economy, or the corruption scandals that have characterized the latest administration under President Enrique Peña Nieto. Ortiz and some of his fellow singers of música regional mexicana, a popular music genre in Mexico, have also stated that compared to the content in other forms of media like soap operas and TV shows, Ortiz’ music video does not contain “something out of the ordinary.” They question the negative publicity Ortiz has received, and sustains that people who don’t like the video will simply self-censor.

After having followed the discussions the video generated on- and offline, I was disappointed that concerns about the content of the video were so quickly dismissed. The response of Ortiz and his fellow singers seemed to suggest that it is okay to produce violent content because others do the same.It also seemed to ignore how in today’s society, where media is so interwoven into our daily lives, media and pop culture represent pervasive and powerful tools that continuously insinuate images and messages into our consciousness. These images and messages, like the ones in Ortiz’ music video, influence the way we come to understand our social environment, what we accept as ‘appropriate’ masculine and feminine behavior, and what we accept as natural or normal in our relationships, including the sexism and VAW so problematic today in Mexico, Latin America, and the rest of the world (Wood, 1994).

Time and again the movie industry, music videos, magazine and TV ads reinforce images of women as pretty; as being focused on the private sphere, on housework, and caring for family; as loyal housewives, angels, and/or victims in need of protection. Women who deviate from these roles are depicted as cold and aggressive villains, witches, and whores, which is often used to justify the violence directed at them (Wood, 1994). The same movie industry, music videos, magazine and TV ads play a key role in the construction of hegemonic masculinities, which ascribe characteristics to ‘real men’ as professionally and economically successful in the public sphere, physically strong, aggressive, heterosexual and generally in positions of domination over women (Kareithi, 2014). The “Fuiste Mia” video is a case in point. And while I am not suggesting that media is the only contributing factor to violence, mounting evidence more broadly suggests that exposure to violence through media does increase the acceptance and risk of engaging in violent behavior (Huesmann and Taylor, 2005). Indeed, Ortiz’ response to his critics reflects  just how dangerously normalized these attitudes truly are, in popular culture and society more broadly.

Further, it’s important to note that Ortiz’ video is one of several videos in less than 6 months to generate discussions about VAW in Mexico. Last October for example, a male TV co-host in Ciudad Juárez, a city known worldwide for its high rates of feminicide, sexually harassed his female co-host on live TV. In this video, Tania Reza moves away from Enrique Tovar after he repeatedly touches her legs. Tovar then hugs Reza and seconds later proceeds to touch her breasts not once but twice. When Reza expresses her discomfort, Tovar proceeds to apologize to viewers for Reza’s reaction and states that she is ‘a little hormonal.’ While Reza and Tovar appear on a subsequent video, where they both state that the whole thing was pre-recorded and a joke, Reza later uses her Facebook account to clarify that she was forced to lie by her employers at Televisa, the largest mass media company in Latin America, about the sexual harassment she experienced during the episode in question. Both TV hosts were subsequently fired.

My point is that we cannot continue to ignore the social, political and economic implications violence has on women, men and our society as a whole, and the case of Reza and Tovar is key in illustrating why this is important. While both TV hosts were fired, Reza was first a victim of gendered violence and was later punished for speaking out against it. In other words, sexual harassment not only affected her physical and emotional well-being, but also negatively impacted her livelihood.

To Ortiz’ supporters and others who suggest that we need to focus on the actual problems at stake in Mexico rather than a fictitious music video, I say that mass media and popular culture form an integral aspect of these actual problems. Furthermore, the evidence of the impact media has on VAW is real and it needs to be prioritized alongside other social issues. Dismissing it as less important suggests that preventing VAW in Mexico is not a worthy cause, and framing it as such dehumanizes women. It also obfuscates the fact that violence is a public health concern, whereby women who are victims/survivors of violence are significantly more vulnerable to short and long-term negative health outcomes, including death and injury, depression, substance abuse, exposure to sexually transmitted infections, unwanted pregnancy, abortion, and low birth-weight in newborns (WHO, 2013).

If we are truly to address, prevent and eradicate VAW we need to understand the factors that contribute to the normalization and acceptance of violent behavior towards women (Huesmann and Taylor, 2005).  Critically assessing and challenging media representations that reinforce unhealthy, sexist and stereotypical portrayals of men and women is an important part of this process (cf. Vega Montiel 2014). As is our continued exploration of the relationship between violent media content and its impacts on the violence we experience in the real world.

Indeed, the thousands of protesters who mobilized to call for an end to VAW on April 24th are challenging this very system in which such violence is normalized. These calls for the eradication of VAW and an adequate multi-pronged approach to the problem must not go unanswered; for only by addressing the multifaceted and complex causes and manifestations of VAW, can we engage in a more serious and effective conversation on the issue. 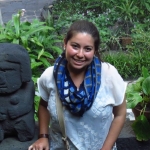 Adriana López holds an MSc in Gender, Development and Globalization from the Gender Institute at London School of Economics and Political Science, as well as a Master of Social Work from the University of Michigan, Ann Arbor. Adriana’s postgraduate dissertation explored the links between the political economy and violence against women in rural Mexico.