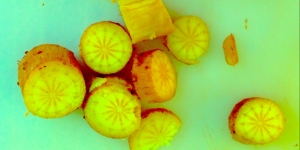 My research concerns gendered labour within food systems in Hawaiʻi. How did a once self-sustaining archipelago become reliant on food imports? This is an agricultural paradox that Hawaiʻi is not alone in experiencing and it can be understood in relation to the promises of international trade, global flows of capitalism and in relation to colonialism – specifically settler colonialism.

The Pacific Islands of Hawaiʻi have been occupied by the U.S. since a coup ousted the independent government in 1893 and Hawai’i became a U.S. state in 1959. The advent of private property dispossessed Native Hawaiians on a massive scale, enabled white settlers to accumulate land and then meant that sugar planters brought people from Asia, Europe and the Pacific to work on plantations.

This kind of plantation agriculture is a central part of colonial projects, as it both literally and symbolically remakes the landscape as well as transforms social relations. Food and agriculture systems offer interesting sites through which to analyse how settler colonial states are maintained and capital is accumulated, in racialised, classed and gendered ways. They are also important sites to understand how these projects are resisted – through, for example, discourses of food sovereignty and in Hawaiʻi, of aloha ʻāina, caring for the land.

My work has tried to unravel some of these threads using multi-sited ethnography. And it may come as no surprise that participation and observation in very different food spaces can be entangling. Specifically, doing gender work as a white settler feminist in decolonising spaces has raised several questions for me.

Firstly, from my specific location, what does it look like to support decolonising movements, even when it is not always clear that such projects have taken on the insights of Native, Native Hawaiian and other anti-imperialist feminists that show how decolonising work is intertwined with gendered and sexual self-determination? And, in a different vein, what are the dangers of settler participation in decolonising spaces, if part of what characterises settlerhood is the propensity to indigenise oneself and lay claim to Native knowledge?

I could spend my time responding to and unpacking these two questions alone. But these dilemmas are sort of just the tip of the iceberg and in the interest of unsettling the submerged, I want to offer something otherwise. So I shall follow the examples of my co-conspirators who have already shared very brave words, and will offer a poem.

I call it “Decolonize with A Z: Patchwork Dictionary for Settlers”

A is for acute decolonising dilemmas

Of where do I appear and when?

Am I an ally

B is built on ambivalence

And for settlers suspending the craft

cutting down on killing joy

loosening our grip on objects most dear

D is for decentering, divesting, de-authorising

for difference and accounting

for making homes in the unhospitable

which is already a privilege

E is for enduring impasses

and uncertain expanses  – instead of enclosures

F for the friends that help us

G is for giving, in all its phrasal forms

giving up, giving in

H is for healing

I, for looking inward just an instant

J, what else but justice?

And for long lines of

For the lāhui re-membering,

And for settlers, learning for the first time

N for this never being enough

O not for owning

but for owning up

For P, what was made pilau

the R is for remembering

Although there may be some love

in these re-workings of the past

That doesn’t save but may sustain

T is for translations

for the frustrated tiredness

of words not transcribed

for the trust bestowed in stories

which are not mine to tell

as much as settlers love to sell a gift

ones not built in my name

V for the violence doubled over into writing

Another, for the“what” that I don’t

held up by the

I’m going on a voyage

And I’m taking with me

mana wahine: this term is often associated with Māori feminist writings, which Simmonds describes as “about recognising the authority, dignity, and power (the mana) of Māori women” (Simmonds 2011: 13). This and other terms have also been used in Hawaiian. Source: Simmonds, N. (2011). Mana wahine: Decolonising politics. Women’s studies Journal, 25(2), 11.

mōʻī: King, sovereign, monarch, majesty, ruler, queen. (Perhaps related to ʻī, supreme. According to J. F. G. Stokes, the word moʻī, king, is of recent origin and was first in print in 1832.) Temple image (Malo 162); lord of images (Malo 173); according to Kepelino and Kamakau, a rank of chiefs who could succeed to the government but who were of lower rank than chiefs descended from the god Kāne (For. 6:266). See ikūnuʻu. The term mōʻī was apparently not used in the Fornander legends collected in the 1860s nor in RC. Source: Wehewehe.org For more see: Kameʻeleihiwa, L. (1992). Native land and foreign desires. Bishop Museum Press.

Amanda is a fourth year PhD student. Her research explores agricultural work in Hawai’i from an intersectional perspectives. She was raised on Oʻahu, Hawaiʻi and traces her family origins back to the British Isles, Scandinavia and parts of Western Europe via Appalachia and the Ozark mountains. She is a member of Sea of Islands Consulting group http://www.seaofislandsconsulting.com/

Bad Behavior has blocked 264 access attempts in the last 7 days.