New Handbook on Gender and the Military

New Handbook on Gender and the Military

By Claire Duncanson and Rachel Woodward 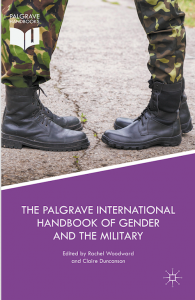 Gender issues in the military have hit the headlines this summer. Whether it’s the celebrations of one hundred years of women in the British military, President Trump’s ban on transgender personnel serving in the US military, or the ‘cultural wars’ – or lack thereof – over the absence of diversity in the big movie release of the summer, Christopher Nolan’s Dunkirk, the intersection of gender and the military is clearly a subject of popular interest.

If you want to go beyond the headlines and really understand the issues raised by this summer’s events, and many more gender and military debates, you need look no further than The Palgrave International Handbook of Gender and the Military, hot off the press and ready for you to order here.

It provides the context, concepts, historical perspective and geographical scope to help readers make sense of and engage with the fascinating intersections of gender and the military. Taken together, the Handbook’s chapters extend debates about the place, utility and contribution of feminist scholarship pertaining to gender and the military, and to military-related issues more broadly. They present in some ways a broadly progressive narrative over time in terms of expanding possibilities for women, changing demands on men, and developing awareness of the centrality of gender within military institutions, all of which reflect the substantial contributions of feminist scholarship and activism. However, as many chapters also show, this narrative of progress is not absolute and must be seen in the context of ongoing violence and insecurity in many areas of the world. Militaries may be changing in their steady inclusion of women, shifting masculinities, and changing gendered cultures, but for many, especially women and other marginalized groups, security seems as remote a reality and problematic a concept as ever. Furthermore, we are not complacent about the power of regressive politics to roll back positive changes around gender issues in military settings. To counter a regressive politics, we must remember that relationships between gender and the military are an issue for everyone.  As such, we invite you to delve deep into the pages of the Handbook and to engage in conversations about the militaries we wish to see (or challenge) in the contemporary world.

Comprised of 33 chapters, the Handbook features lively engagement from different perspectives about key issues pertaining to the gender–military nexus.  As an International Handbook, it is cross-disciplinary, and will be of particular interest to people who study gender and military issues within political science, gender and women’s studies, international relations, human geography, sociology, the humanities and anthropology. It will also be of key interest to military personnel themselves, especially those developing policy around gender issues, including the Women, Peace and Security Agenda and Equality and Diversity Issues, in the UK, and beyond.

Part I explains and explores the most significant theoretical, conceptual and methodological approaches through which the relationships between gender and the military have been studied. With chapters on liberal feminist, anti-militarist feminist, critical military studies and organisational perspectives, as well as qualitative and quantitative methods and approaches, the first part offers both a guide to the rest of the book and an important collection of intellectual engagement in its own right.

Part II, exploring state militaries, sets out in detail how a range of social constructs shape the experience of participating in state militaries and influence state militaries’ responses to the challenges they pose. Authors examine how identity, ethnicity, sexuality and (dis)ability help theorise and understand gender and military connections, while also posing important practical issues for state militaries and their personnel. These chapters demonstrate that gender is crucial to fully comprehending the factors and forces that shape people’s experiences in and of state military institutions and modes of organisation. These chapters tie earlier discussions of conceptual approaches to illustrative empirical examples.

In Part III, we consider state militaries in action. Chapters in this section draw on many of the issues introduced earlier to consider how gender intersects with different operational contexts and transformations. Whether direct combat, counterinsurgency, peacekeeping, humanitarianism, or the roles militaries play in political transformations, gender can be seen as a profound influence on the goals and practice of military operations.

Part IV draws together engagements with gender in non-state military contexts. Covering private military and security companies, NATO, the UN, terrorist and other non-state armed groups, our authors explore gendered dynamics from a variety of theoretical perspectives. Here too, it is clear that to fully understand the rise of privatised security, what motivates terrorists, or the dynamics of rebel groups, gendered analysis is crucial.

The final section of the Handbook examines a range of ways in which different cultural forms represent gender in the military. It provides a novel take on the topic, as few social science books venture into the terrain of popular culture, and thus moves the Handbook into more groundbreaking interdisciplinary territory. Focusing on cultural representation reminds us that the relationships between gender and the military play out not only within military institutions and through the bodies and experiences of military personnel but also through popular culture and mass consumption. Our contributors in this section engage with a variety of forms of representation, including visual, cinematic and textual.

The Palgrave International Handbook of Gender and the Military has been published as part of Palgrave’s Handbooks series, and you can encourage your university library to order a copy.

This piece first appeared on The University of Edinburgh’s Politics and International Relations blog  on 24 August 2017 and is reposted here with permission.

Claire Duncanson is a Senior Lecturer in International Relations in the School of Social and Political Science, University of Edinburgh, UK. She is author of Gender and Peacebuilding (Polity 2016) and Forces for Good? Military Masculinities in Afghanistan and Iraq (Palgrave Macmillan 2013). She tweets as @cpduncanson.

Rachel Woodward is Professor of Human Geography in the School of Geography, Politics & Sociology, Newcastle University, UK. She is co-editor of the Routledge Companion to Military Research Methods (2016), co-author with Trish Winter of Sexing the Soldier (Routledge, 2007) and author of Military Geographies (Blackwell, 2004).