Anti-Genderism in the Non-West: Looking from the Other Side

Anti-Genderism in the Non-West: Looking from the Other Side

Anti-gender mobilizations are one of the recent social movements that have been active in Europe and other parts of the world since the mid-2000s. The concepts of gender, gender identity and other related social phenomena have been studied by scholars of different backgrounds – but most profoundly by gender studies scholars – for decades. Currently, many societies are facing so-called “anti-genderism” which, as Villa defines it, “is a bridging signifier for a variety of anti-statal, anti-EU, mainly ethno-nationalist racist and/or xenophobic, aggressively heteronormative and overall anti-pluralistic constellations…” Building on that definition, anti-genderism does not only affect the basic ideas of studying gender, but also significantly re-shapes discourses, meanings, notions and the ways of studying them within the discipline itself.

My feminist lenses, which are developed in my further points in this text, do not let me look at this issue only in European and other western contexts. And by doing so, I do not mean to homogenize the concept of West/western and non-West/non-western, but in this case I proceed with my idea that the major research on anti-genderism is done in “western cultures”, in both geographical and colonial understanding. And for that reason, it is crucial, for me especially, to reveal these challenging modifications as well as to understand, expand and value manifold dimensions of studying anti-genderism in non-western contexts.

The notion of gender and the preliminary discourses around it are predominantly western phenomena. According to several sources, gender began to be studied and has been institutionalized as a field of scholarship in the 70s and 80s, particularly by Anglophone scholars, and in English speaking societies and cultures. There are also so many intersections between linguistic and social sciences approaches to gender that are sometimes incompatible in non-western linguistics.[1] Together with the help of development agencies, such as UN, World Bank and others, through international projects, official declarations and conventions, the concept of “gender” has been spread around non-western societies through policies and mechanisms of gender equality and gender mainstreaming. This is not, of course, new, since most gender equality related commitments of non-western states are based on international cooperation and benefits from it. 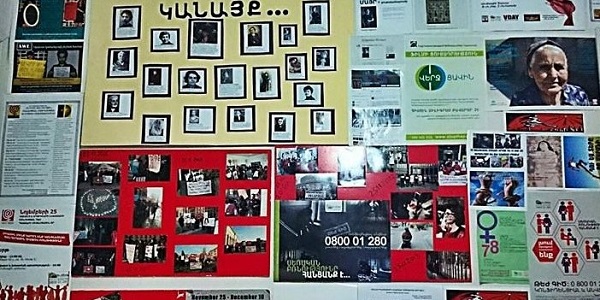 Photo: Posters on the wall of the office of Women’s Resource Center Armenia NGO, taken on April 16, 2015 by the author.

Having said that, my aim for this short analysis is to point out that, basically, in non-western contexts the notion of gender started to shake many religious and traditionalist (and fundamentalist) ideologies long before it came back to Europe as a threat. In order to develop this argument, I will divide this piece into three major points that I present below, informed by my experience of working in the field of gender studies in Armenia.

First of all, the types of challenges that have recently surfaced in Germany, France and other European countries were already on-going in the non-West. The fact of having significant research material on anti-genderism in predominantly western countries makes it even more important to look at it from a global perspective. The “invention” of gender, so to say, had some major threatening effects in many countries where ideas of gender equality, women’s equal representation and the rights of people with “unacceptable” sexual and gender preferences were not even in the everyday discourse. Many scholars, policy-makers, and religious authorities have been against these ideas and phenomena throughout. This new wave of anti-genderism is hence not novel for non-western societies but, particularly, it was and is still an ongoing process. It continues to re-shape the socio-linguistic thinking and understanding of gender constructions in there by affecting both gender scholarship and having negative effects on some people’s lives almost every day.

The second dimension of my thoughts goes into understanding the intersections of anti-genderism with nationalism. Many countries in the so-called “Global South” have undergone the very fact of establishing an independent nation-state relatively recently (such as post-socialist countries, post-colonies in Africa, to name a few). My specific interest is mostly in post-socialist countries also because I, myself, am from a country of the “post-bloc”. So, what I see in this context is that nationalism and nationalist attacks, used by the anti-gender movement representatives (specific groups of people, church, members of Armenia’s former parliament, media representatives and editors), are at their best a playing card for them. I do not have a specific standpoint on this, but what I see is that there is this fear of losing something static in their ideology, such as national identity. This fear is tied with the strict heteronormative gender roles that most of societies possess and follow, in which men are typically represented as bread-winners and warriors and women as bearers of the soldiers (aka, sons, aka, the nation). Accordingly, blaming “gender ideology”, gender equality, and thus the freedom of expressing one’s gender identity is a basic mechanism of survival; a survival strategy, in which, in this case, there must be an “other” to be blamed for the loss of the “national future”. For instance, in the Armenian case, the main anti-gender newspaper published lots of articles about creating alliances of protection of national future, or about the importance of the struggle against making Armenia a “Genderstan”, a country where gay people adopt all the children, make them gay as well, and the nation never reproduces again. In this case, by blaming so called “European or Western values” – meaning human rights, freedom of speech, tolerance and acceptance and other discourses related to human lives, freedom and dignity – the main figures in anti-gender movement mentioned above describe them as a main threat of losing one’s national identity.

Last but not least, the final direction is the very discursive challenges that gender studies undergoes in non-western societies (as well as everywhere!?!). What I mean here is that the usage of the term “gender” is usually presented as a problem in and of itself in many countries, from which, for instance, Armenia is not an exception. Whether new or old, there is an explicit tendency of shutting down conversations about the usage of the word “gender” (“գենդեր” or “guender”, in Armenian pronunciation) in policies, projects and public speeches, which end up being replaced with phrases such as “of men and women” in order not to distress the alleged sensitive ultra-aggressive groups that have been formed on nationalist and political bases. When the first explicit anti-gender attack started in Armenia, the government changed the name of the law on Gender Equality to a law of equal rights and equal opportunities of men and women.

A few years ago, I myself participated in one of the topical meetings in Armenia, during which a government representative of a very high rank told the participants that there is a non-formal agreement around state officials in Armenia, not to use the “G” word in public documentation. Another point concerning this issue is the lack of serious academic acceptance of gender studies that could open more possibilities to study and explore the issues related to gender. For instance, I have been part of an establishing committee of Gender Studies MA degree in Armenia, and it was not taken as seriously as other fields of social sciences or humanities. This is widely manifested in jokes, rejection of “gender studies” as an academic discipline, constant struggle of researchers in this field to prove things that are already proved in other contexts. Nowadays, only few scholars in Armenia have a determined interest in doing research in gender issues. So, basically, considering that gender is mostly and more consistently studied in non-academic environment (activists, civil society, non-governmental spaces) in Armenia, as in many other post-socialist countries, it is not an invention of the wheel that there are major conflicts in its discursive construction as well. However, it should not limit the possibilities of expansion/extension of studying gender in this (non-western) context as well.

To sum up, what I have tried to do with this post, is to show once again that although being understood and framed as more of a “western invention”, the concept of “gender” is studied and must be valued in non-western locations as well, especially in the context of anti-genderism. My aim is not to blame the West or point out the pitfalls of gender studies (I may do that but somewhere else), but mostly to show that anti-genderism affects non-western cultures as well but in moderately different aspects, especially if we consider the fact that the backlash against the concept of gender has always been present in these societies. What I am trying to bring to the readers’ attention is that as far as I can see from the research on anti-genderism, although it is affecting non-western societies and states (in geographical and ideological perspectives), it has not received the same attention from the international scholarly community, except for when it affects western states and their democratic political establishments. In addition, I find it extremely important to study anti-genderism as a phenomenon in its complexity and as multi-dimensionally as possible, based on different geographical and ideological circumstances. I hope this will challenge all the writers, scholars, researchers and students of related disciplines, and people who are interested in the topic of anti-genderism and its effects to dig deeper and have even more sensitive approaches in their thinking. 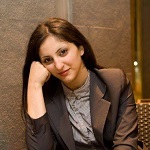 Siran Hovhannisyan is a researcher in the Center for Gender and Leadership Studies of Yerevan State University in Armenia. She combines her academic affiliation and teaching with active membership in Women’s Fund Armenia. In June 2018 she graduated from Central European University Gender Studies MA program. Siran is actively involved in studying multi-level expressions of anti-genderism, feminist movements as well as sexual education in Armenia and other post-socialist countries in comparative perspective.

Bad Behavior has blocked 1009 access attempts in the last 7 days.