Hijras and the legacy of British colonial rule in India

Hijras and the legacy of British colonial rule in India

On 6 September last year the Supreme Court of India struck down Section 377 (S377) of the Indian Penal Code (IPC), decriminalising homosexuality. Introduced during British colonial rule in India in 1864 as a legal transplant of the British 1533 Buggery Act, this section criminalised non-procreative sexualities. Historically it was used to target, among others, transgender persons, including hijras, a traditional community in India and South Asia more broadly. Hijras were traditionally powerful figures in charge of collecting taxes and duties in the Sultanate and Mughal courts (Arondekar, 2010). While S377 was not specifically designed to target the hijras, it criminalized them as a group, and had serious implications for the community. Though the striking down of S377 is a positive signal to the hijra community in India, this legal ruling must still be translated into an effective policy in order to begin to address its lasting repercussions for the hijra community. 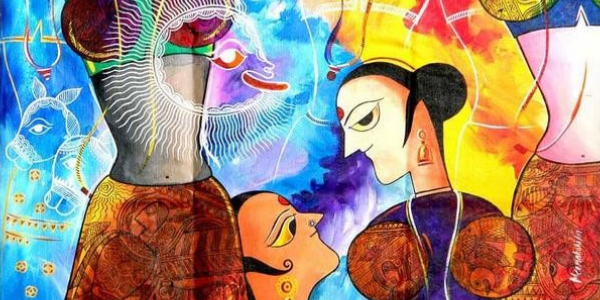 Painting from the Hijra series by Meenakshi Jha Banerjee. Reproduced with the artist’s permission.

In what follows, I examine contemporary legal struggles through a historical analysis of how sexuality was used by British colonial rule to thwart potential dissidence from a specific group in India. S377 is an interesting case to evaluate over time the resistance of the hijra community and measure to what extent the law is implemented through particular policies. State policies became punitive in 1864 under the colonial rule. These policies were subsequently reversed by the removal of IPC S377 in 2018. However, the legacy of colonial rule is not simply undone by the striking down of this law. A Transgender Bill introduced in 2016, which has not yet been passed by the Upper House of Parliament, threatens to mark a U-turn from progressive judgments and the much awaited removal of S377. This Bill, which attempted to prohibit discrimination against transgender people, has faced much criticism and failed to reach consensus in Parliament. Due to the shortcomings of the proposed Transgender Bill, the legal success of two landmark cases handed down by the Supreme Court in 2014 and 2018 fail to be translated into concrete policies.

Criminalisation through a Foucauldian lens

The body policing as well as its medicalisation imposed by colonial rule pathologised all non-heteronormative behaviours. According to Foucault, bodies are controlled through discipline over centuries, by repressing and silencing sexuality (Foucault cited in Young, 1995). The colonial state asserted control over hijras through constructing knowledge about them as deviant in order to criminalise them as a group. The colonial legislation (Indian Penal Code, IPC/1861) and Criminal Tribes Act (CTA/1871-1897) relied upon forensic medical science to provide ‘rational’ evidence linking fluid sexuality and criminal acts to support court hearings. For instance, in the case of Queen Empress v Khairati (1884) a distended anus and signs of syphilis were used to establish the non-normative sexuality of the subject and ascertain his criminality under S377. The colonial state relied upon forensic science to control hijras in the courtroom. The identity of hijras was reshaped with the help of forensic science into a discourse of nuisance and pollution imported from England, which stood at odds with pre-colonial India’s tolerance towards sexual diversity (Reddy, 2010).

By imposing a “legal panopticon” aimed at control, the colonial state marginalised hijras: S377 had specific repercussions on the hijras’ way of life and status within society. Such policing stigmatized the community with lasting effects that can be seen in contemporary India too. Considered outsiders to society, hijras struggle to access employment, healthcare and justice. The IPC also served as a template in other British colonies, which inherited a version of S377 as well as its consequences on the local perception towards sexuality.

Early political leaders of post-independence India, Nehru and Gandhi voiced their opposition towards S377 IPC and its consequences for the tolerance of Indian society towards non-normative sexualities (Nataraj, 2017). Activists took to the legal field to challenge S377 IPC and its long-lasting consequences on the Indian society. A first petition challenging the constitutionality of S377 IPC was dismissed in 1994 by raising the argument of the protection of social and moral values of the Indian society. Ironically, the British relied upon the same rhetoric of protecting moral values to implement S377 IPC in 1864. After two more unsuccessful challenges by the Naz Foundation in 2001 and 2009, the Supreme Court of India finally struck with two progressive landmark judgments. In 2014, the Court recognised the third gender and affirmed the constitutional rights of transgender persons in NALSA v. UOI. In 2018, the Court overruled S377 IPC on the basis that it violated fundamental rights enshrined within the Indian Constitution. Despite these progressive legal judgments, the Transgender Bill proposed in 2016 failed to translate the progressive spirit of these two judgments into concrete policy making.

Over a century after the first prosecutions under S377 such as Queen Empress v Khairati, the 2016 Transgender Bill is a missed opportunity to undo its legacy and address key issues faced by transgender people in India in terms of discrimination, sexual violence and employment opportunity that the Supreme Court outlined in its progressive judgment in 2014.This key judgment which laid foundations for the Bill upheld the right to self-determination as the most fundamental right of a person. The Bill, which was introduced in Parliament in 2016 and passed in the Lower House in December 2018, sparked great criticism from the transgender community across India. Some key points of contention have included the fact that the proposed Bill does not advocate for a gender-neutral law; it criminalises begging, which is an essential means of survival for many transgender people; it fails to give effective remedy under criminal law; and it dismisses reservation (caste -based positive discrimination) for jobs and education. Further, the Bill denies the right to self-identify without medical expertise, which stands in direct opposition with the guarantee outlined in  the  Supreme Court’s judgment in NALSA v. UOI (2014) of the right to self-identification without the need for medical intervention. Recently, the Upper House was adjourned before passing the Bill so uncertainty remains as to whether the Bill will now be reintroduced in the Parliament. What is clear, however, is that the Bill represents, in many ways, a step backwards in efforts, such as the previous progressive judgments of the Supreme Court in 2014 and 2018, to undo the colonial legacy of S377 and defeats its purpose by failing to uphold human rights under the Indian constitution and international law and standards.

The case of hijras demonstrates what is at stake in legal struggles. It shows how the law produces identities, and then tries to control them, but that it can also become a vehicle for popular prejudice. In contemporary India, hijras and transgender groups alike are fighting to protect progressive legislations that move beyond the gender binary as well as against the remnants of prejudices dating back from colonial time. What is at stake is the right to be different. As Mayur Suresh notes “With section 377 gone, there’s hope for change”. This hope, as Baxi underlines, is for “a renaissance of human right to difference.”

Sophie Hunter is a recent law graduate from SOAS (University of London) with a previous degree in international politics from the University of Exeter. Her interests range from South Asian studies, to neuroeconomics, environmental affairs, and international maritime conflicts. She is planning to pursue an LLM in London next year and was until recently interning at the UN in New York.

Bad Behavior has blocked 579 access attempts in the last 7 days.