On the 3rd of June 2015, massive protests shook Argentina to its core, as 200,000 people took to the streets in Buenos Aires to express their outrage over the killing of a pregnant 14-year-old girl, Chiara Páez, at the hands of her boyfriend. Since then, Ni Una Menos (Not One Less), the collective that was behind this mobilisation, has tirelessly campaigned and advocated for justice, having a particular strength and resonance in the Latin American region.

In their first book, Amistad política + inteligencia colectiva1 (Political friendship + collective intelligence), the collective uses a wide range of discursive practices that are central to its resistance against hegemonic power relations in Argentina. Ni Una Menos’ work against inequality operates through the mobilisation and circulation of specific discourses that build a transversal2 form of activism, paying attention to varying and intersecting forms of oppression and inequality. Through the use of such perspectives, the collective manages to disrupt the normalisation of unequal power relations in different social locations.

This book brings together documents and manifestos put together by the collective from 2015 to 20183: it is both a testimony of the group’s untiring activism to put an end to violence against women, but also written proof of its increasingly transversal approach to feminist activism. It has managed to create a collective voice based on solidarity, without erasing differences. As explained by Judith Butler, Ni Una Menos was formed “through a realization of a common social condition and a social bond, one that recognizes that what is happening to one life (…) is also happening for others”.

Reading through the pages of Amistad Política offers a glimpse into a form of activism that inherits lessons from differing legacies: it not only takes on the longstanding fight against femicide in Latin America, but adopts queer and decolonial perspectives on feminism. This is key to its work as a counter-hegemonic force. Indeed, if we understand hegemony in Gramscian terms, which consider that “hegemony is not exercised in the economic and administrative fields alone, but encompasses the critical domains of cultural, moral, ethical and intellectual leadership”, it follows that the circulation of new knowledges is essential to radical social transformation. In fact, Gramsci, in his Prison Notebooks, argues that what is needed is a cultural “war of position” through which the hegemony of the ruling classes is overpowered and new understandings of the world are consolidated by marginalised groups. This involves the articulation of a wide array of popular forces to create a new ‘national-popular’ culture. Similarly, in the book Yearning: Race, Gender and Cultural Politics, bell hooks argues that “understanding marginality as position and place of resistance is crucial for oppressed, exploited, colonised people (…) these margins have been both sites of oppression and sites of resistance”.

Such an endeavor is being put in practice by Ni Una Menos. Under a single feminist umbrella, it manages to bridge a diversity of social, cultural, political and economic issues in Argentina, thinking through multiple forms of oppression. It disturbs assumptions surrounding machista violence by turning it into a public issue, linking it to historical human rights struggles in the country. It constructs a vision of society where everyday violence is tolerated and normalised, allowing a war against women to unfold, undisturbed. It holds society as a whole, as well as the State, accountable for the perpetuation of such violence. Throughout their documents, the collective repeatedly presents high rates of femicides in Latin America as a symptom, or the logical result, of a society that culturally constructs feminised bodies as things that can be used for male pleasure, disciplined and discarded. In framing femicide in such a way, what Ni Una Menos effectively does is transforming a traditionally “private” concern into a public issue, thus echoing a longstanding feminist cry: “the personal is the political”. Furthermore, the collective calls out the embeddedness of the State in unequal gender relations, and presents it as a key oppressor of women – most evidently in the refusal to grant the right to legal, safe and free abortions, but also in its failure to effectively protect victims of machista violence. 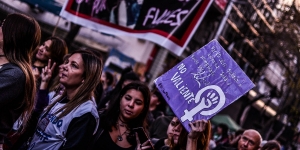 Additionally, the collective prides itself on “generating unusual alliances”, creating a mobilisation of women, lesbians and bisexuals, travestis, trans and feminised bodies4. It denounces the violent maintenance of heteronormativity and the consequences of compulsory heterosexuality, as well as violence against those whose gender identity does not fit within binary conceptions of gender. The collective struggles against a moralistic and religious understanding of sexuality and speaks up for those who are socially constructed as “deviant”. Ni Una Menos queers the feminist struggle by taking into account and naming the subjects of non-normative sexualities and gender identities. With this, the collective interrupts the cultural configurations that maintain heteronormativity.

Ni Una Menos has described itself as a struggle “against racism, discrimination and xenophobia against indigenous women, black afro-descendants and afro-indigenous women (…) against the genocide and the femicide of women, which has its origins in the slave trade and colonial violence”. This declaration is an echo of Rita Laura Segato’s concept of femi-genocidio: to her, this term needs to be widely used for “crimes which, due to their systematic and impersonal qualities, have the specific objective of destroying women (or feminised men) for being women”. In describing this concept, Segato describes a system of power that rests on various hierarchies, notably the patriarchal, racial, economic and colonial power imbalances that maintain systems of oppression. She argues that the resistance to recognising the seriousness of femicide is just one way of maintaining social power inequalities.

Additionally, Ni Una Menos effectively recognises the inequalities that exist between women: “as long as care work is not a responsibility shared by society as a whole, we are forced to reproduce classist and colonial forms of exploitation amongst women”. With this, the collective not only acknowledges different experiences across racial and class lines, but has a transversal conception of justice that integrates various experiences in a “constellation of struggles”, including issues such as racist migration laws and the criminalisation of the Mapuche population.

Thus, the collective picks up on perspectives from postcolonial feminisms that aim to create coalitions across differences, seeing the interconnectedness in the logics of oppression and resisting colonial dichotomies that aim to separate populations through logics of “us vs. them”. Ni Una Menos underlines the specific vulnerabilities of indigenous peoples and afro-descendants, integrating their grievances into the feminist struggle while not overlooking multiplicity – it is creating coalitions that do not ignore complexity and difference. The integration of these voices is seen through the adherence of several indigenous and afrofeminist groups to the collective’s manifestoes through time (especially in recent years, where their writings have become more explicitly anti-racist and decolonial). These include the Mujeres Indígenas por El Buen Vivir, Columna Negras Indígenas Racializadas y Disidencias, and Coalición de Mujeres Negras.

By integrating these perspectives, Ni Una Menos offers a critique of forms of development that put economic gain above indigenous communities, nature and social justice. The collective connects these issues to the inherently exploitative nature of the capitalist system, which relies on the oppression of women and other marginalised groups for profit. This is another angle through which Ni Una Menos offers a critique of the Argentine State, showing that under the guise of ‘progress’ and ‘development’, it is participating in enterprises that harm its population – both directly through the dispossession of the Mapuche’s territories, and long-term due to the adoption of a development model that is not socially nor environmentally sustainable and deepens global inequalities. It seeks to resist “the new colonial and imperial forms that exercise their power over our economies and our territories”.

An illustration of this is the way in which Ni Una Menos has shown solidarity with the Mapuche struggle against land dispossession. Indeed, the resurgence of the “mapuche conflict” in Argentina in recent years was ignited by the purchase of sizable parcels of land by private corporations in Patagonia: in the face of indigenous protests, the government has approached the question as a security issue, using harsh repression on protesters. The collective has spoken up “against the new colonisations of territories by multinational corporations that strip away our common goods through government-sponsored extractivism, treating life as a commodity and degrading the Mother Earth”5.

The collective creates links between the feminist fight, the struggle against land dispossession and the protection of nature. This is particularly evident in their claim that they are fighting “against multiple dispossessions: because neither the earth nor our bodies are territories of conquest”. With this, Ni Una Menos circulates a narrative that builds interconnections between the exploitation of feminised bodies and the exploitation of nature at the hands of hegemonic capitalist and patriarchal systems of power, which devalue them and construct them as disposable. In paying attention to structures of economic and class-based oppression, Ni Una Menos resists the construct of the “neoliberal feminist subject”, who is understood to be responsible for her own freedom, adopting instead a collectivist basis for resistance which considers that no such freedom and justice can be achieved without radical social, political and economic change.

With this, Ni Una Menos is a collective that does not sit neatly in categories of “socialist”, “radical”, or “eco-” feminism: it takes on multiple feminist legacies to produce a collective that addresses and resists a variety of social realities, relating them to the oppression of women and gender non-conforming groups. While it could be labeled as a transfeminist, anti-capitalist collective, this still seems to oversimplify the range of its interventions. The collective has begun a process of linking struggles across various sites of subalternity, creating solidarity across difference, putting collective experiences above individualistic claims. It has seized the opportunity to construct counter-hegemonic knowledge based on the daily lives and experiences of marginalised groups. In resisting the discourses that maintain social inequalities and existing power imbalances, Ni Una Menos opens a door for change. 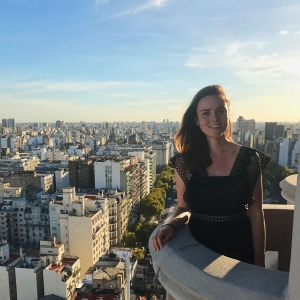 Aude Langlois has an MSc in Gender, Development and Globalisation from the LSE, and she is currently working as the Programme Communications and Marketing Officer of the UK-based charity Teach a Man to Fish. In her spare time, she is a volunteer journalist for the International Women’s Initiative online magazine, The Lead.

Bad Behavior has blocked 252 access attempts in the last 7 days.