The Politics of Rainbow Maps

The Politics of Rainbow Maps

To analyse the lived experiences of LGBTQI+ people in Europe, as discussed here, we have downloaded the aggregate level data of the FRA survey and selected relevant questions from the different themes addressed in the survey. We created three indices that relate to the themes of Living an Open Life, Violence and Harassment, and Discrimination. Each of these indices is constructed by taking a simple average of relevant questions (see table below) which has then been normalised using the min-max normalisation (to allow for cross-index comparison). The Lived Experience Index itself is then the average of its three comprising indices, which we again normalised for comparison. All indices are measured where higher scores resemble better lived experiences.

To identify the Queer Utopias and Dystopias, we have created a displacement index, which is based on the difference between the LGBTQI+ Equality Index (E) and the Rainbow index (R)

The Displacement Index (DI) is constructed as the relative change (with the average as reference) between the two indices, using the following formula: 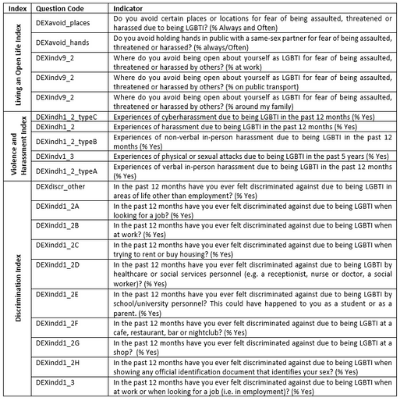 Bad Behavior has blocked 666 access attempts in the last 7 days.