Conflict and Gender: Understanding the intersections

Conflict and Gender: Understanding the intersections

Conflict is not unidimensional; it is not bidirectional either. It manifests in more ways than that may be perceptible at a time. Indeed, these experiences are always evolving and in flux, especially in protracted conflicts like Kashmir. Decades of conflict in the Himalayan region of Kashmir has left no aspect of life immune and seeped into the minutiae of everyday life and social relations. While some manifestations like half-widowhood, loss of livelihoods, custodial tortures are overt, others, like the breakdown of societal relationships, are multifaceted and complex, and often remain invisible and normalised.

The generation born after 1990s grew up witnessing violence and state repression as an everyday lived reality in response to Kashmiri people’s demand for self-determination. This 70-year-old conflict has seen phases of high escalation between the two nuclear armed neighbours – India and Pakistan – over Kashmir, unrest in the Kashmir valley over demands for self-determination, increasing deployment of armed forces and violence against civilian population in the region. In this post, I argue that conflict and militarisation shape everyday realities, and experiences of women living in Kashmir in latent ways such as restricted access to public spaces, increase in sexual and gender-based violence (SGBV) and overall strengthening of gender roles. I further argue that any analysis of the impact of conflict needs to be grounded in the socio-political context of Kashmir and intersections of militarisation with cultural and societal beliefs as well as practices. 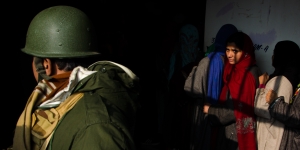 Photo credit: Rayan Naqash, 2014. Published with permission for this blogpost.

Following Foucault, Haste and Abraham (2008), normalisation is defined as socio-cultural sensibilities that become accepted theories over time defining what is acceptable, normal and rational, and what remains contested in a society. In protracted conflicts, this can be seen in the ways in which intersections between everyday violence, protracted violence, cultural practices and beliefs shape gender norms and those of masculinities and femininities. For example, Kazi (2007) in her discussion on the cultural politics of militarisation in Kashmir writes, “that militarisation in Kashmir has generated a masculinist social environment that, in turn, subjects women to greater social policing and control and regressive versions of ‘Islamic’ identity.”

In this regard, Cynthia Cockburn (2013) explains this process as a “continuum of war”, wherein masculinity and traditional masculine values are reaffirmed and linked to protectionist tendencies. In the need to act as providers, men often cross the line between performing their duties as partners and acting as regulators of femininity. Similar proposition has been put forward by Cynthia Enloe (2014) who describes militarisation as a socio-political process that rests on the belief that “hierarchical relations produce effective action; and that in times of crisis those who are feminine need armed protection.”

A closer look at the everyday experiences of Kashmiri women reflects how SGBV, strengthening of underlying social patriarchal systems as well as traditional gender roles occur in a protracted conflict. This happens across the spectrum – in private as well as public spaces. Consequently, women lose access to public spaces, institutions and facilities. In such communities, violence against women therefore is not only a consequence of the general notion of patriarchy but militarised masculinity as well.

Women’s  access to and participation in public sphere and their articulations of the impact of militarisation are a recurring theme in the works of Kashmiri scholars such as Ather Zia, Inshah Malik, Hafsa Kanjwal and others. While images of Kashmiri women standing up to the state forces reaffirm their exercise of agency and participation in public spaces, in no way do they mitigate the everyday experiences of patriarchy enabled by militarisation that women navigate across private and public spheres.

A few years back at the office of a well-known human rights organisation, a number of women gathered to put on paper their experiences of militarisation. Several of them wrote about their experiences of navigating public spaces dotted with the presence of Central Reserved Police Forces and local police forces. The chains of checkpoints and heavy deployment made it daunting to travel across these roads, regardless of their age or educational background. The discussion concluded with most of them saying that they take alternative routes or avoid going in those directions altogether. The stories do not end with choosing alternate routes.

Kashmir has a history of schools and educational institutes being turned into camps by the army and paramilitary forces. Mirza Waheed in his novel ‘The Book of Gold Leaves’ describes the occupation of schools during the early 1990s through the story of a young girl. Initially, the girl is ambivalent to the presence of forces in her school building but soon begins to notice minute changes – covered windows, disappeared furniture, frisking of bags by military wala (military personnel) – as fear engulfs her. The most striking change in her classroom is the absence of girls who, all of a sudden, have gone on “leave” from school and eventually the school is shut.

Waheed’s fictional account of the experience of a school girl during the 90s falls in line with the impact of occupation of schools on the dropout rate of students documented by the Jammu Kashmir Coalition of Civil Society, a human rights collective. Likewise, Neerja Matoo describes the 90s as a phase that brought a complete “about turn” to women’s participation and access to education wherein getting formal education became a luxury. Nearly two decades later, colleges and universities in Kashmir continue to witness a marked presence of central armed police forces. During student protests in 2018, the forces used tear gas shells and laathicharged on the students protesting inside college campuses. In 2017 too, the police admitted to the use of  “mild force” and “some” tear gas inside colleges.

In the last few years, the landscape of the valley has changed tremendously, especially since August 2019 when the Indian state abrogated Jammu and Kashmir’s nominal autonomy. Many bus stops have been turned into makeshift bunkers with checkpoints and barricades becoming more visible. This spatial architecture together with impunity provided to state forces under Armed Forces Special Powers Act (AFSPA) reduce women’s access to public spaces. Additionally, incidents of rape and molestation of women by the forces have engendered a deep sense of insecurity. In this context, women and girls making their way to schools, colleges and universities struggle against both militarism and patriarchy.

Theoretically, Kashmir’s public sphere can be described as Agamben’s ‘state of exception’ where laws exist but cease to be in force where they operate, and unfurl violence. Access to public spaces has historically been linked to freedom of expression and barriers to the same clearly signifies an absence of the latter.

The decade of 1990s blurred the lines between private and public spheres. During crackdowns, men in the locality would be made to gather in a common area as forces entered homes where only women were allowed to stay. Presently, cordon and search operations (CASO) have replaced crackdowns that have turned homes into public spaces where forces can exhibit and exercise the same power as they would in public spaces. Several instances of sexual assault have been reported during these search operations. This shatters the belief that women are safe inside homes in private spaces.

In most conflict-affected societies, SGBV related data remains very low due to under-reporting. Among families, fears of sexual violence are rarely discussed but often hinted at indirectly by restricting women’s access to public spaces. This is partly due to the notion that women belong to the home and majorly because of the history of instances of state inflicted SGBV against women with impunity.

Studies also suggest that domestic violence gets accentuated in conflict-affected societies wherein access to healthcare and justice becomes limited, thereby limiting women’s options to seek redress. Domestic violence which is highly prevalent in Kashmir, receives little or no attention as a societal malaise and is seen as incidental and episodic. With curfew and communication blockade stretching for months in 2016 and more recently in 2019, women’s ability to seek redress are hugely blocked. Domestic violence occurs within four walls and in most instances, women share this space with their perpetrators. With restrictions on communication and movement, the possibility of sharing, reporting or seeking respite from violence is curbed. In instances of severe physical violence requiring medical support, access to hospitals becomes nearly impossible. In such times, inflicting violence for perpetrators becomes easier.

Another reason for limited access to justice systems is the lack of institutional accountability. On the one hand, there is fear of SGBV and on the other, the history of ‘fake encounters’ enhances fear of perpetrators being brought under state radar and subjected to various forms of human rights violations that may be unrelated to the actual complaint against them.

In Kashmir, the discourse around violence against women and patriarchy is so singularly sculpted that women raising such issues are seen as attempting to divert attention from the larger acts of state violence. This singular approach misses the analysis of intersections of conflict with socio-cultural forms of violence against women because of the possibility of it being coopted by the Indian state to further their propaganda against Kashmiri men. This invisibilises gendered violence, thereby normalising it. Once such violence becomes normalised, community attempts to end it also become largely non-existent.

However, in understanding the intersections of militarisation and patriarchy, it needs to be clearly laid out that SGBV due to militarisation is not only when the state and its actors directly inflict violence on women. The conditions of control over public spaces and surveillance act to exacerbate various gendered forms of violence. Adopting this prism allows analysing patriarchy and gendered forms of violence such as domestic abuse, dowry deaths and honour crimes as an extension of militarism.

In conclusion, it is crucial to accept and acknowledge SGBV faced by women and understanding the intersections with the conflict because, like with other issues arising out of militarisation, only a collective effort can help mitigate the effects of such violence. 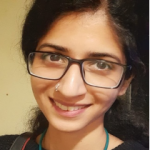 Arshi Showkat is a PhD scholar from Jamia Millia Islamia, New Delhi. Her work focuses understanding the experiences of women victim survivors of domestic violence in navigating formal and informal mechanisms of redressal and justice delivery. Her interest lies in exploring the intersection of gende-based violence and militarisation. She has been working with several intervention programs dealing with ending violence against women and children in Kashmir. She is on twitter.