Academic research is inevitably implicated in extractive processes. Even with the best of intentions, all research involves extracting from the Other to “produce knowledge”. There is always a degree of objectification and “speaking about” (or “speaking for”) others that occurs. Western academic institutions have benefitted not just from the flow of profits from colonies, but also from their epistemic location which affords them the ability to extract from the archives and experiences of peoples “outside” the West to generate “expertise” (Gopal, 2021). This results in epistemic advantages that accumulate over time.

The extractive dimensions of academic research are heightened for stigmatised groups such as sex workers, who are an over-researched population across many disciplines but massively underrepresented in academia and even within mainstream social movements. Within popular discourse, sex work is represented through sensationalist and racialised portrayals of suffering (Andrijasevic, 2014). Additionally, sex workers are often systematically excluded from scholarly and policy conversations through a variety of discursive maneuvers, such as pathologising discourses that construct them as “too damaged or traumatised to be credible”. This credibility deficit is a form of epistemic injustice (Fricker, 2007) that removes their ability to influence how they are represented and the interventions carried out ostensibly to “help” them. The US government’s requirement that all recipients of its funding for foreign anti-trafficking or HIV projects and programmes commit to an anti-prostitution position shrinks spaces for sex workers to advocate for themselves, conduct research, and build political agency (Chuang 2010: 1684). It also de facto exports the US carceral model for sex work to the rest of the world.

Today, I would like to talk about decolonising sex work research based on my own experience of collaborative research with the Philippine Sex Workers Collective, a loose alliance of sex workers in the Philippines advocating for decriminalisation. In my initial encounters with the leaders of the Collective, they made clear their lack of trust in feminist academics, researchers, and journalists. By sharing some of their concerns and the complexity of my methodological journey, I hope to contribute to thinking about how to undertake more ethical and transformative research on sex work.

The Collective’s first objection was to the amenability of some feminist scholarship to carceral logics and restrictions on women’s freedom: sex work was regularly represented as a crime of men against women that could be solved through policing, stricter migration regulations, rescue operations, and rehabilitation of “victims”. This was not in line with the lived experiences of their members: sex work was significantly better than their realistic alternatives; the stigma and criminalisation of sex work are what heightened their precarity; and they were significantly more threatened by the police than their clients and third parties. The Collective rejected the common paternalistic motivations behind attempts to research sex work in the Philippines: they did not want to be “enlightened” or “saved” – either by Filipino or foreign “experts”. Eventually, they decided to work with me, with a very important caveat: “We would be happy to grant your request but we are careful not to have this construed as a benevolent action on your part.” 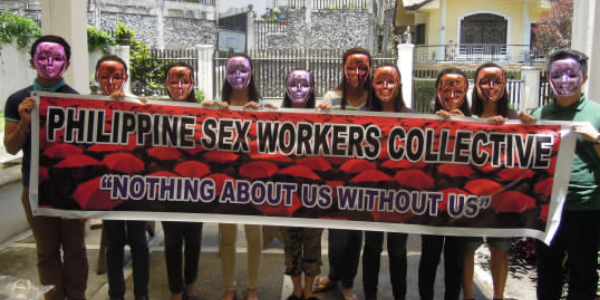 Taken from the Philippine Sex Workers Collective Facebook page (August 3, 2014), with permission to reproduce for this blogpost

I did not want to reproduce the violent hierarchies of knowledge production in my encounters with sex workers and wished for my research to serve as an assertive exercise that centres sex workers as political actors and authorities. I developed a collaborative research programme with the Collective. We designed interview questions and reflected on participant recruitment, including ways to ensure the safety and comfort of participants, and how to compensate participants and reduce barriers for sex workers with childcare obligations. They recognised that they were relatively politicized as an organisation and that I also needed to engage with sex workers who were not their members, which required working with other gatekeepers. They accepted that I needed intellectual space to develop my own conclusions, but asked that I accord considerable weight to sex workers’ reflections in my writing. We also agreed that “reporting back” after the research was done would not be enough: feedback had to be iterative, and I consulted them regularly throughout the different stages of my project, including transcription and translation, the selection of direct quotes and images to use, and the major claims based on the research. I worked with them to ensure that my translations of interview responses reflected the elegance and rhetorical flair of the original statements. Throughout my writing, I have tried to acknowledge intellectual debts to the Collective and other sex worker participants by foregrounding their insights and reflections. As Mott and Cockayne (2017) explain, “Through the process of citation, we bring with us those bodies and ideas deemed legitimate and worthy of attention and dialogue – those who we want to remember.”

My core research method was “pakikipagkwentuhan”, or roughly “collective story-telling” over a period of four years with over 100 Filipino women street and establishment-based sex workers. Drawn from but not limited to approaches in Filipino psychology (Pe-Pua and Protacio-Marcelino, 2000), it involved informal, semi-structured and unstructured conversations in natural settings. Mine were conducted in someone’s home, or parks and restaurants, often over shared meals (“salu-salo”), and sometimes involving dancing and karaoke. Participants were welcome to ask each other questions and ask me questions, and to introduce conversation topics, photos, and other materials. This method involved “pakikipagkapwa” (roughly translated as intersubjectivity, or a sharing of the self and blurring of the boundaries between the self and the other). It sees the research process not only as an academic exercise, but also as a source of validation and psychic relief for participants (“lunas sa karamdaman”), and a space for recreation (“libang”) – in addition to other political possibilities generated by the knowledge produced. This was important because Filipino sex workers rarely had space to convene socially and deliberately reflect on their work or share their experiences, which makes it harder for them to define and shape society’s understanding of their work. Many of the sex workers who met through these gatherings over three years ago have stayed friends and some have become more politically active. Several described our “pakikipagkwentuhan” as “therapy” – “It was heartwarming to know that someone cares about my thoughts” (“May pakialam ka pala sa amin – nakakataba ng puso”).

Other steps I have taken to reduce extractivism in my research include publishing a version of my work in the vernacular for non-academic audiences; redirecting speaking and writing invitations to the Collective and reminding organisers that sex workers need to be compensated for their time and intellectual labour; working with the Collective to vet their public engagements in terms of risk and value to them and developing security strategies to protect the privacy of members; supporting the Collective in writing grant proposals; and intervening in selected academic and policy discussions on sex work in the Philippines to challenge dominant representations of sex workers as passive victims, in consultation with the Collective.

My interactions with the Collective made clear to me that the academic research structure we inhabit is built on a logic of exclusion. We draw on people’s experiences and emotions to generate “knowledge” using specific vocabularies and conventions, through which we accrue professional privileges. Our research partners and participants, however, may not see any material improvements in their lives and do not always receive credit as authoritative knowers. My research relationship with the Collective is immensely rewarding and productive, but can best be described as a “loving struggle”. They raised difficult but incredibly important ethical and methodological questions. They wanted to know why my research was necessary and how it would benefit sex workers. They were curious about how someone without experience in sex work would be able to adequately understand and represent sex workers’ voices, let alone make research participants feel safe and accepted so they do not simply tell “sad stories” which they assume most “civilian” researchers expect to hear. We also discussed how to manage any possible differences in interpretation of interview data between myself and them. I have partially resolved these challenges, at best, and these remain open conversations.

Ultimately, it is important to recognise that we will not be able to fully remove ourselves from extractive and colonial structures of research, but there are steps we can take to minimise these harms, recognise the intellectual contributions of actors outside academia, and build more reciprocal research relationships. 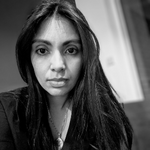 Sharmila Parmanand is an ESRC postdoctoral fellow at the Department of Gender Studies in the London School of Economics and Political Science. She has a PhD in Gender Studies from the University of Cambridge. She is currently working on a monograph based on her dissertation, tentatively titled Saving our Sisters: The Politics of Anti-Trafficking and Sex Work in the Philippines.

Bad Behavior has blocked 1013 access attempts in the last 7 days.