In the first week of 2022, I was invited to give a guest lecture about anti-gender activism and the role of the university in and for right-wing discourses and mobilization strategies[i]. To prepare for the talk, I went back to the literature on the anti-gender movements, which mobilized around the concept of ‘gender ideology’ in Europe and Latin America in the 2010s[ii], and lately in the United States. When comparing these movements to other current developments, I noticed something that had previously slipped my attention. I was surprised to find just how blatantly similar discursive constructions of gender and the pandemic (or rather the means to counter it, like masks and vaccines) are in right-wing narratives. In particular, I found strong overlaps in how they rely on a mix of anti-academic sentiments, body politics and dehumanization to frame their politics around both anti-gender and anti-Covid measures. Moreover, these constructions expose how mainstream right-wing discussions on both gender and the pandemic offer important connector points into the discriminatory ideology of the Far Right[iii]. Let me elaborate…

The politics of science and the rejection of academic knowledge

Both ‘gender ideology’ (which is an empty signifier, but generally is used to refer to the knowledge that gender is socially constructed and extends the binary of male and female) and anti-Covid19 measures such as vaccines, lockdowns and masking are products of academic research. Researchers have long pointed to anti-elite narratives as one central tenet of populism across geographical locations. In the context of recent mobilizations around gender and the pandemic, this anti-elitism is intricately connected to anti-academic sentiments. There is a strong narrative of universities as elitist spaces of radical left-wing or ‘cultural Marxist’ propaganda, which has become a staple of both mainstream and far-right discourses, and can easily be mobilized to discredit scientific analysis. During the last decade, this anti-academic move was commonly confined to social sciences and gender studies. This attack was most obviously advanced by Viktor Orbán, who succeeded in abolishing gender studies all over Hungary by brandishing them as illegitimate propaganda. But this strategy is not specific to Europe. As Judith Butler points out, the opposition to gender in education has linked organizations across countries and continents. In the context of the pandemic, the anti-academic sentiment has been extended beyond gender studies. The ire of anti-vaxxers is targeting public health as an intersecting field between social and natural sciences, but also stretching into the very heart of natural sciences when disputing and attacking the results of medical and biological studies. Thus, the pandemic has moved right-wing discourses from a rejection of social sciences towards an overall rejection of the university as scientific authority. While even extreme far-right and conspiracy discourses are replete with references to (pseudo-)scientific methods to underline their often outlandish claims, traditional academic spaces are consistently and increasingly questioned. This provides opportunities for far-right calls to fill this perceived vacuum with ‘alternative’ science. This move simultaneously builds on and opposes traditional spaces and forms of knowledge production by producing “alternative” (mostly online) versions of authoritative knowledge formats such as universities and encyclopaedias to disseminate and legitimate far-right content.

As an important means to justify this turn away from academic institutions of knowledge, far-right discourses commonly build a dichotomy between the rational, reasonable and ‘common sense’ knowledge of the many and the irrational, brainwashed and hysterical zealots on campus, who have fallen prey to the propaganda of a powerful elite. 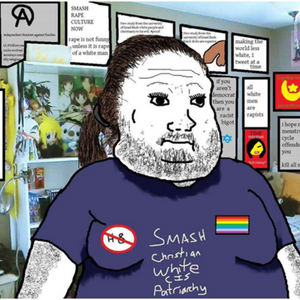 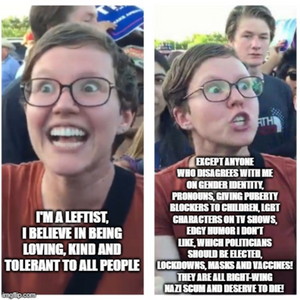 In the context of anti-gender activism, this representation is captured in the image of the ‘Social Justice Warrior’ (SJW). This image, which has since been disseminated in countless memes (like the one above), is highly gendered. Like many far-right memes, the SJW meme emerged on 4chan but reached a wider audience in the wake of the coordinated harassment campaign against female gamers #Gamergate. Visualizations of the SJW mostly depicted as non-male, either as women or of ambiguous gender, they are also not conforming to hegemonic ideals of femininity (or masculinity), representing the right-wing imaginary of the stereotypical white feminist. The memes are also interspersed with misogynist stereotypes of women as ‘irrational’ and ‘hysterical’. By depicting them as either screaming or ignorant – or commonly both as well as associated with elite academic institutions, the SJW is able to serve as prime antagonist for the Far Right and can be associated with a variable range of concerns, which are cast as leftist, irrational and threatening. This is mirrored in the construction of academic experts on both gender studies and (public) health as simultaneously irrational and powerful and violent attack on bodily integrity, which at the same time delegitimizes academic expertise, as well as justifies the resistance against it as an act of self-defense borne from reason and common sense.

The body politics of the Right

Falsely casting one’s own activism as self-defense against oppression is an element that unites right-wing populist and fascist mobilizations across geographical and social contexts[iv]. A particularly striking parallel between anti-gender and anti-vaccine narratives across contexts in this regard is how the threats they base their advocacy on are both framed as a direct threat to the integrity and autonomy of the physical body. Disregarding the fact that the idea of gender diversity is closely related to the fight for bodily autonomy, anti-gender ‘ideology’ justifications almost always assert the intent of gender advocates to disintegrate the binary heterosexual body and replace it with a gender-less ideal. Since far-right ideology does not allow for the possibility of bodies that are different from normative corporalities, different bodies have to become a threat to one’s own body; an assertion, which is common in anti-trans discourses. This construction is also visible in other antifeminist, misogynist right-wing causes such as anti-abortion and anti-same-sex marriage, whereby those who do not conform to embodied gendered norms of sexuality and femininity are constructed as a threat to that very hegemonic ideal despite their advocacy for co-existence. In the case of vaccines, masks and lockdowns, the effect to one’s own body is even more directly tangible. Similar to the idea of taking the supposed physical essence of gender identity, a particularly powerful (while false) claim of the right has been the change of the DNA of those vaccinated with mRNA vaccines. 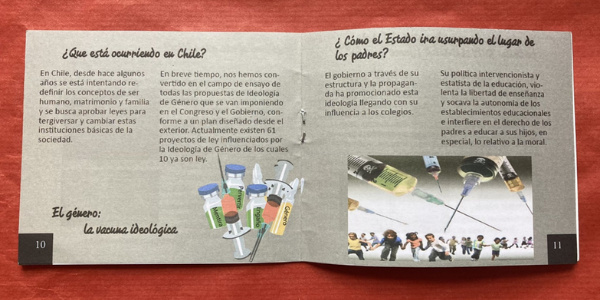 Image description: Excerpts from a leaflet produced by a pro-life, anti-gender ‘ideology’ campaign led by Latin American-based organisation ‘Somos Millones’ (We are Millions). The image above describes how ‘gender ideology’ is making its way in Chilean schools and how gender works as an ‘ideological vaccine’ aimed at indoctrinating children. Photo credit: Tomás Ojeda.

Yet, the most successful mobilization has tended to occur where the physical threat to the individual body becomes augmented through its position in connection with other (societal) bodies (culture, nation, ethnicity). A particular ‘other’ body heightened in both discourses is the one of ‘the child’ as worthy of particular protection, an idea which is also part and parcel of conservative anti-abortion mobilizations, where it is used to overwrite the right to bodily integrity by those giving birth. The idea that children suffer extraordinarily from masks, vaccines and lockdowns have been central throughout the pandemic, while at the same time, their exposure to the virus has not yielded nearly as much resistance. The fierce resistance by some parents to school closures and school vaccination offers in the name of children’s safety (while at the same time some students advocate for more measures) bears some similarities to the narrative in conservative discourses, which frame gender equality and antiracist education materials in schools as undue state interference into family life. At the root of this narrative is the idea of the family as apolitical unit, an assumption, which has always been contested by feminist theory and activism, because it obscures how exclusionary and violent structures in society have been reproduced through family politics for centuries.

The politics of dehumanization

It is in this obscuring of how bodies are affected by existing cis-hetero-patriarchal structures, or more precisely in the process of dehumanization that accommodates them, where maybe the most horrific of the overlaps between anti-gender and anti-vaccine discourses can be found. At their heart, both gender equality policies and many anti-pandemic measures serve and protect groups, who are particularly vulnerable, both due to their physical health and their sexual and gender identities. Moreover, both the pandemic and gender-based violence have been shown to interact with ableist, racist and classist societal structures and disproportionately affect people with disabilities as well as communities of color. Anti-Covid measures, such as masks, vaccines and lockdowns, while they tend to be justified in a variety of ways (some more, some less problematic), do offer a way to protect those that have been identified most vulnerable to the virus. In a similar way, feminist policies are mostly (and indeed always should be) geared towards those who are particularly vulnerable to the (social) pandemic of patriarchy. Upholding the rights of LGBTIQ+ persons is meant to counter the structural and interpersonal violence they experience under the status quo. The direction of anti-vaccine and anti-gender discourses has been the opposite in that they aim to obscure, silence and declare worthless those who are already marginalized. In both discourses, this becomes blatantly obvious in the much-voiced assurance: “There are not many of those”.  By denying the need for vaccines and gender equality, they deny the very existence and legitimacy of those whose lives depend on such policies. They thereby neglect the real-life experiences of all those who are not young, able-bodied, cis, hetero, white carriers of privilege. While this has always been obvious in anti-gender discourses, where those experiences are often simply presented as lies, the anti-Covid discourse exposes even more blatantly the absolute and unimaginable violence of right-wing bio-politics, which assigns whose lives are worthy of protection and whose can be ignored.

The goal of feminist advocacy has always been to make visible the abuse suffered at the hand of the discriminatory structures of inherently racist and cis-hetero-patriarchy that is the basis of our societies. As has become clear from the parallels in right-wing discourses on both gender and the pandemic, this includes those whose lives and health are at stake because of the Covid-19 pandemic, many of whom are also the victims of the systemic intersecting pandemics of capitalism, racism and patriarchy. While this is not always necessarily the case, from an intersectional and standpoint feminist perspective, centering the voices and experiences of those vulnerable to the health effects of the pandemic, in my definition must therefore also be a natural part of feminist advocacy. 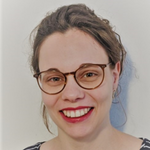 Ann-Kathrin Rothermel (she/her pronouns; Twitter: @ARed_belka) is a research associate, lecturer, and PhD candidate at the IR department of the University of Potsdam in Germany. Her research centers on the gendered dynamics of political violence with a special focus on transnational radicalization and counter-radicalization processes both on- and offline. She has recently published with International Feminist Journal of Politics, International Affairs, Social Politics: International Studies in Gender, State & Society and Critical Studies on Terrorism.

[i] Right-wing politics is a contested and fluid concept, which encompasses parts of both conservative political parties as well as more extreme violent movements on the Far Right, which has been defined as “a political space whose actors base their ideology and action on the notion of inequality among human beings, combining the supremacy of a particular nation, ‘race’ or ‘civilization’ with ambitions for an authoritarian transformation of values and styles of government.” (Fielitz/Laloire 2016).

Bad Behavior has blocked 436 access attempts in the last 7 days.