Clubbing without the club

Clubbing without the club

NB: see at the bottom of this article for a mix from the London rave scene, for optional listening while reading.

The club as a location would seem inherent to clubbing. However, during lockdown in London these locations were made unavailable. As a result, clubbing temporarily moved exclusively online. At this time, I wanted to undertake documenting queer clubbing events happening online as an important epistemological vantage point of a queer public that congregates around nightlife[1]. I ended up discovering that the move online uncovered an alternative approach to clubbing as an object of study, generated by the need for more fluid methodologies. Below, I outline what online clubbing looked like, and how I researched it, before I discuss in which locations next to explore clubbing as a mobile object of study.

Online clubbing events during lockdown were typically entered via a zoom link sent out to ticket holders at the time of the event. The link led to a zoom room which simultaneously displayed every attendee’s ‘bubble’ while the sound channel was monopolized by music played by the host. Presenting a completely new experience at the time, the space immediately spurred considerations around access, as people who had previously not been able to attend clubbing events, because of disability or cost, were now able to join. As opposed to clubbing in its most conventional form, an event at a nightclub, people could now rely on their own home for accessibility along with features online such as closed captions and audio description. Furthermore, the price of tickets was usually cheaper than in person, if not free, dependent on the level of commercialization of the event, given the low cost of facilitation without a venue. However, this was a drawback for participants who usually go clubbing to escape their home, participants who are not “out” or even safe at home, people who would usually find refuge in nightlife. Clubbing as queer escapism and communality had thus changed its form, to the benefit of some and the detriment of others.

The move online also raised new and exaggerated old challenges from the perspective of the researcher. For one, the familiar challenge of a fleeting archive, which was already present in the case of physical clubbing considering its marginal position in the cityscape[2], became even more pronounced. There was no collective physical archive such as an event space, flyers, pictures, or remnants of decorations and costumes following the online events, although there is a digital footprint which needs to be investigated. Without a physical location to build connections and trust, it was also extremely hard to directly include participants in the research. Concerns around anonymity are extra pronounced online; people generally do not trust strangers who reach out to them on the internet, and the nature of the events made it impossible to conduct interviews while there. Instead, I needed an alternative to relying on other participants for my research. 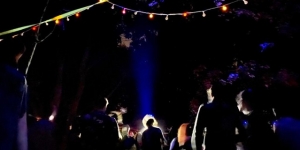 In lieu of traditional methods used to research clubbing, I chose to rely on autoethnography to create my own archive. This research method heavily implicated my own participation in the events, as well as the writing and research process. Although I had already been an avid club-goer before lockdown, the artificial boundary that I had erected between myself, and my object of study was now broken. I was now simultaneously a club-goer and a researcher in the same space. Trying preserve this boundary was further complicated by the necessity of adhering to a dress code and other initiatives such as donations, competitions, and film screenings at the events. I did so both to be allowed to participate by the organisers, but also so I did not disrupt the space for the other participants.

To reckon with the paradox of being present in the online space, but not actually having anyone else in my immediate physical reality, I found Atuk’s methodological outline of a queer feminist cyber autoethnography the most apt[3]. Atuk argues that the queer researcher in sexual cyberspaces can take advantage of dynamics of cruising, which allow one to be both distant yet involved in the actions taking place. These dynamics also promote horizontal research, as the distance between the researcher and the participants they are observing is expected as part of cruising etiquette. It allowed me to navigate my own position as both club-goer and researcher. In Paasonen’s words, I regarded myself more as a ‘lurker’ in the space, blending in with others but not being physically present[4].

However, autoethnography heavily relies on the researcher’s own experience, and I found this to be especially the case during lockdown. Since I was not directly interacting with anyone specific, or even in the same physical location as the other clubbing participants, this research was almost entirely a solo somatic experience. Returning to Paasonen, she argues that we often have a somatic experience of online explicit material before we can consciously interpret our affect towards it. The high-intensity stimulus I would usually experience from congregating with others at the nightclub in person[5], was also somewhat present online. Because I was experiencing online stimulation in congruence with others, online clubbing became an expression of embodiment with which I approached my own room, a type of queer phenomenology.  By viewing clubbing as by definition an intra- and inter-personal embodiment it becomes mobile, and able to be invoked in any space available, as I was doing by myself at home. If clubbing as an object of study can be invoked even if removed from its physical location such as any sort of nightlife venue, it opens up the possibility of researching its existence in a multitude of places. I want to end with an exploration of what that might look like.

The flexibility that clubbing proved capable of by moving online during lockdown means that it has since returned to not only some of its old locations, but also some new ones. The hostile environment in London after decades of austerity, development and extreme gentrification means that in the same way that there has been a decline in LGBTQ+ venues[6], there has also been a decline in independently owned venues in general, cemented by lockdown as a turning point for the nightlife industry[7]. While corporate establishments such as Fabric took the time to renovate during lockdown[8], independent venues struggled to stay afloat, with alternative London staples such as The Cause eventually shutting down for development[9]. Moore points out a fluid dichtomy by differentiating between places like these as “the mainstream gay club” versus “those sleazy, illicit, secret, off-the-map, transient, grimy, soon-to-be-bull- dozed spots – the places with glory holes, club kids, drugs, and bouncers that are constantly on the look-out for the police. These spaces are often fugitive in nature and committed to a politics of anti-respectability”[10].

However, the momentary lapse in legal clubbing during lockdown seems to have enabled an increase and, to an extent, an inflation of illicit raves in London. Forest, squat, and warehouse raves are now more widespread and expensive given the increase in demand while established venues were shut. They are seemingly catching up to their commercial counterparts, except that they are still just as illegal, and come with added risk of illness and fines. Returning to the dichotomy of clubs pointed out by Moore, the new format of clubbing online shows its adaptability, while the illegality of in-person raves displays its fugitivity. When one avenue of congregation is shut down, another will be found and spread through communal networks online and in-person.

Through these networks, clubbing follows its participants to wherever they embody it, instead of via any specific type of physical venue like a nightclub. Viewing clubbing as a mobile object of study, removed from location, reveals a broader horizon for researching clubbing through the guise of technology and the body, as well as how it does or does not interact with physical infrastructure. While research on clubbing already deals with issues of privacy, anonymity, and a fleeting archive, these issues become poignant in a different way, yet to be explored. Knowledge around the networks through which clubbing is increasingly facilitated online and in person is lacking. Clubbing as queer phenomenology also allows us to think of it from the perspective of someone who does not have access to these spaces, especially in combination with the added threat of disease and persecution, although not a new experience for the queer community. These are all considerations to take forwards with us while researching clubbing in unconventional ways within established locations of research such as the nightclub, and in altogether new locations of research: at home online, in conflict zones[11] or wherever else people choose to invoke it. Most importantly, approaching clubbing as a fluid object of study allows us to re-recognise the resilience and rebellion of queer nightlife. 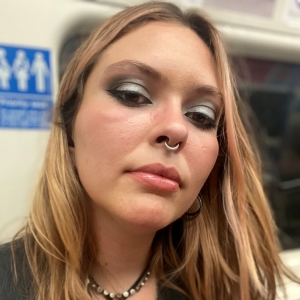 Nina Bo Wagner holds an MSc in gender from London School of Economics and is currently an editorial researcher in academic publishing. She is a podcast host on the New Books Network’s channels ‘New Books in Sex, Sexuality and Sex Work’ and ‘New Books in Gender’. When she’s not at the club, she can be found reading about mediated sexuality and urban social theory.

Mendoza, Madalyn. 2015. ‘What’s it like to party in one of the most dangerous cities in the world: Juarez, Mexico’ for My San Antonio. See https://www.mysanantonio.com/lifestyle/article/Juarez-s-party-worth-dying-for-a-look-inside-the-6462278.php Last visited 15/6/2022

[1] A place on the fringes that is often overlooked as a site of knowledge production demonstrated by Muñoz, Jose Esteban (1999) in Disidentification: Queer of Color and the Performance of Politics. Minneapolis: University of Minnesota Press

[4] A term used in a study of online explicit material which I return to later by Paasonen (2011) on page 6 in Carnal Resonance: Affect and Online Pornography. Massachusetts: Massachusetts Institute of Technology Press

[5] I often refer to clubbing as congregating since it is often called ‘church’ by avid club-goers.

[6] See ‘Why LGBTQ+ Spaces are Vital in London’ by Ben Campkin on The Bartlett Annual Review 2020 for statistics on their decline, and their changing role in the cityscape.

Bad Behavior has blocked 556 access attempts in the last 7 days.