Liminalities of time and its flashes

Liminalities of time and its flashes

Blossom acts as a seasonal clock even before daylight savings. Spring comes and the days stretch. Every April, I think about T.S Eliot’s bankers walking over London Bridge trying not to jump, the minutiae of a life measured by coffee spoons, all of Plath’s unlived lives. Up Bond Street, Clarissa Dalloway has the oddest sense of being unknown. A different character cries by the fountain at Regent’s Park. Who are these unhappy Londoners? This February, I began measuring my life by 270ml bottles of unsweetened cranberry juice for a scientific study at King’s College London. These single use plastic bottles are 60ml less than the smallest Stella Artois and provide none of the joy. Three days a week I walk over Waterloo Bridge. When I look to my right, I see bridges stacked up on top of each other and a horizon that never stops. To my left, Big Ben documents unused time. I don’t think I can walk any faster.

The screen lock of my iPhone is my 90-year-old nanaji and me caught mid discourse. He’s probably ensuring that I never leave West London. Paraphrasing Samuel Johnson, he tells me: “When you’re bored of London, you’re bored of life.” This is said with an authority that is intermingled with his apprehension of me leaving him. As I shoehorn it into conversation, my friends tease me at a bar in Brixton, “sorry, did you live in Toronto?!” But have I mentioned it? My university city? Charging up and down College Street — from my undergraduate campus to my basement apartment in Little Italy, Kensington Market, and eventually, Chinatown — my nana and I talk on Facetime. I show him the snow. There’s lots of crime in Toronto he frets, and I have to resist the urge to correct him: it’s actually the safest city in North America, much safer than London. You don’t “actually” your elders.

It turned out to be true. Not that there’s a lot of crime in Toronto but rather that I’m the sort of person who, every spring, finds herself in situations that should only happen to unhappy Londoners who exist in unhappy fiction. On someone else’s champagne birthday, I detail a police report where I testify that I had been physically assaulted and coerced (as my detective later revealed) by one of Toronto’s most notorious meth addicts. I thought my entanglement with criminals had ended that January. When the on-and-off girlfriend of the Italian mobster I had met at a King Street club a year and a half prior, rang me twelve times in six minutes to order me to “stay the fuck away” from her boyfriend. Fair enough.

I don’t recognise that version of myself anymore — she wasn’t measuring her life by sips of cranberry juice, or steps across Waterloo Bridge, or the chimes of the most famous bell in the world. She was taking big gulps and somehow still struggling to breathe. 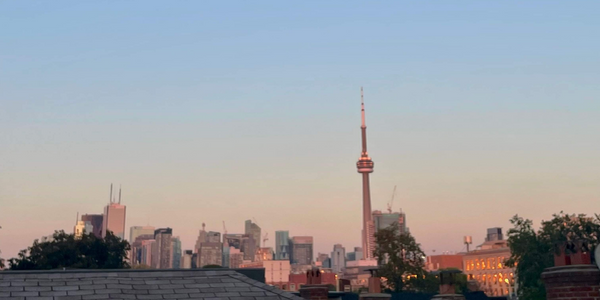 “Dr Morie” or “Marie” is white, about 5ft 3, slim build but strong. They have stubble on their face which is gaunt and elongated. High cheekbones. They are wearing a Peaky Blinders esque hat, with a little tuff of dirty blonde hair sticking out, blue surgical gloves, and a black mask with a glittery purple rim. The mask had writing on it, but I can’t remember what it said. When they briefly lower it to smoke a cigarette, the teeth that are crammed in their mouth – un-aligned – look aged and yellow. They wear a wool-blend grey jacket with a collar that reaches the top of their thighs. I just wanted to help. I didn’t think it would result in a stolen cheque of 31,480.73 dollars CAD entering my student bank account, and all my money ($2600) leaving it. I didn’t think a detective would tell me that I was lucky to have not ended up dead in a crack den. I didn’t think I would be sitting in the CIBC on Boor and Yonge, begging my bank to take me seriously. I never thought that whilst I was telling and retelling, I would miss a call from Shediac, New Brunswick and then my phone would ring and ring and ring. I didn’t think I’d pick up and put it on speaker, where the person on the other end of the line would say: “It’s Marie, are you ok? Hello, hello?” and then hang up. Did that really happen to me?

Marie told me that they were a PhD student, but also that they were homeless. They were rich but had no money for a taxi. Their mum was a judge and had 2 Louis Vuitton bags and a Birkin. The two of them were close enough to share shoes but not to see each other Monday through to Friday. They told me that their dad was a policeman. Or was it that he was a deadbeat? Or maybe that was Marie? They were known to wear a hijab or a cross or a Star of David. Marie went by she and he and they. They had been raped, multiple times, by their partner or their friend or a man who just wanted to watch them break. They smoked feverishly and talked so fast I couldn’t catch up. They had a dirty pink make-up bag that balanced precariously on the top of their stolen cheques and other things required to be, perhaps not a criminal mastermind but someone who was desperate for their next fix. That spring, to make back the money I had lost, I worked 50+ hours a week. I stopped sleeping; I still carry mace. They got arrested in June, found on a sofa at Queen and Bathurst; my detective bullied my bank into reimbursing me. At a police station, not far from Marie’s sofa, he told me that they were pleading guilty and would be sent to a male prison in Milton, Ontario. I think we both made each other’s lives a little bit worse.

In July I flew to British Columbia for the remainder of the summer in an attempt to reclaim myself, decompress, get a grip etc. In exchange for watering her plants, my friend from my first-year residence loaned me her mum’s penthouse in Mount Pleasant. For a month, I woke up at 4am to watch the sun rise between the mountains. I ate pickles and cheese and drank cheap beer and got darker walking to Kitsilano under the midday heat. I dived off boats and swam in cold lakes and didn’t reply to texts. Later, I took a sea bus to North Vancouver where I stayed in Quayside Village, a co-op — home to eccentric West coasters and their dogs. And I remember thinking, why am I leaving? My bhua lives in White Rock, a 41-minute drive from downtown Vancouver. Her house sits on stilts and has a patio that overlooks the ocean. She fed me the food of our ancestors and poured me expensive red wine in glasses so thin I was scared they would shatter if I held on too tightly. I stopped Face Timing and started sitting. I read Ruth Ozeki, Natalie Diaz, and Joan Didion in a pool — surrounded by forest — that was always kept at a temperature of 97 degrees Fahrenheit. I enjoyed my stillness and time was forgiving. 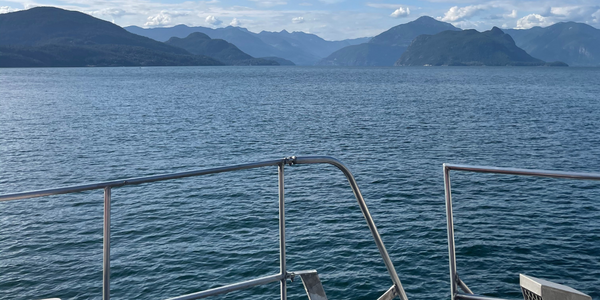 Back at home, I churn out essays and work 5 part-time jobs and continuously chase a goal post that keeps moving because I can’t make up my mind. I still read fiction, sometimes with a boy who lives far away, but I wish was closer. He is gentle and sends me 10-minute voice notes about the Boston Red Sox, female mixed martial artists, and Soviet Russia. When he speaks, I am transported back to when I would sit in the backseat of my parents’ car listening to E. B. White read Charlotte’s Web and feel safe. I’ve told him he should think about recording audiobooks for a living, but he ignores this frequent suggestion. When he’s at the gym, he listens to podcasts about the Chechen Wars of the 1700s and sends me photos of his lunchtime sandwiches filled with falafel or aubergine but always bright pink pickled turnips. He’s not really a boy — at 27 years old, he’s three years older than me, and possess a quiet self-assuredness that I’ve yet to harness. He flits between wanting to move to London to Belfast to Oslo to Geneva to Washington DC to Boston to Mumbai to Nairobi or back to the Middle East. “I’ll go wherever I get a job” he tells me, and I worry that our bookclub will become a footnote in his story and the closeness we have built will fall away.

When borders closed in March 2020, I was sitting on a bed (that wasn’t mine), drinking a Stella (that I hadn’t bought) in a basement apartment in Harbord Village (a student populated neighbourhood near the University of Toronto). Over the next weeks, Ontario’s Premier made garbled announcements on CBC and avoided eye contact with the camera whilst I lived with someone who avoided eye contact with me. For a month, I would run down to the waterfront and then back up to Casa Loma and stare out at the city — waiting to leave.

I did leave — hurried and strangled on May 2nd. Toronto’s unstable shift in seasons happens so softly you almost don’t notice until it’s September again. As the measured May warmth overtook the last of April’s frost, I sat on an international flight from YYZ to LHR with four other passengers, the cabin crew, and cargo.

Recently, I’ve been wondering and writing about migration (academically, ancestrally, and personally). I frequently think about the people who ended up in limbo between borders during the Spring of 2020 and the overpowering feeling of stuck-ness. I still feel stuck, even now, with the borders open and many COVID-19 mandates having been lifted. It’s the same feeling of bottled claustrophobia I felt in 2017 before I moved to Toronto, and then again in 2020, when I rushed back to London on an empty plane for a palpable summer.

Some days, I brazenly think that I will move to New York or Montreal or do the journey my dad did but in reverse. If I have kids, would they move back to London? Is it cyclical, the way my father and I continuously go from North America to the UK and then back again? 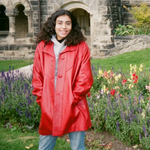 Kashi holds a BA in English and Russian Literatures from the University of Toronto and is currently completing her MSc in Gender, Policy and Inequalities at LSE. Her main research interests are diasporic poetry, ecoliterature and the gendered nation, queer racialisation, and existing in a liminal state of in-betweenness. Outside of academia, Kashi enjoys early mornings, big cities, and rambling voicenotes. Sometimes she listens to stories, and sometimes she tells them.