Self-proclaimed ‘gender critical’ feminists have grown increasingly loud within the UK political space over recent years. The last few months alone have provided ample evidence of their expanding influence within governmental circles, non-profit and corporate environments. The impact of their rhetoric and political action has been and will continue to be devastating for trans people, from the halting of reforms to the Gender Recognition Act despite public support, to ever more intense levels of transphobic violence taking place online and offline. Recognising these harms as the primary damage, I am curious to understand what are the secondary, less obvious but by no means less insidious, effects of the deployment of ’gender critical’ feminist arguments on contemporary UK and global feminist discourses. More specifically, I explore the function of so-called ‘gender critical’ feminism as a reactionary response to anti-racist and decolonial campaigns which aims to both reclaim the centrality of white women as the ultimate victim in public debates, and to divert attention from calls to recognise and address the role of feminist movements in upholding systems of white supremacy and imperialism worldwide.

In July 2020, JK Rowling infamously decided to take a very public stance on the issue of trans rights and women’s safety through a series of tweets and an essay. As Black Lives Matter (BLM) protests spread around the world in response to George Floyd’s murder, and as Edward Colston’s statue was toppled to highlight Britain’s lack of accountability towards its colonial past, the novelist’s choice to use her substantial platform to reignite the debate on trans rights appeared highly insensitive and a product of her current class and race privilege. Alyosxa Tudor asks “How bored and annoyed must JK Rowling be that she thinks the perfect moment in which she can reheat her […] comments is the height of Black Lives Matter?” (emphasis mine). This incident is a good starting point to reflect on how ‘gender critical’ arguments interact, both temporally and discursively, with anti-racist, intersectional and decolonial critiques of Western, white liberal feminism.

Firstly, the exclusion of Black women and other women of colour from mainstream feminism, which generations of Black and decolonial feminists have highlighted and fought against[1], seems to rest on not-so-dissimilar principles to the exclusion of trans-women. One of the core arguments of so-called ‘gender critical’ ideology is that trans women cannot be fully ‘accepted’ as women because their experience of womanhood is not identical to that of cis women and trans women can therefore not fully comprehend or empathise with the supposedly universal subordination of women. This argument rests on the fiction of a single female experience, a fiction which has routinely silenced and side-lined women who experience racism, colonial domination and other forms of oppression that cannot be singularly attributed to their gender.

‘Gender critical’ feminists often demand the exclusion of trans women from female-only spaces based on their belief that they retain some forms of male privilege, which they supposedly accrue from society before transitioning. Such ‘residual’ male privilege, they claim, might disrupt the sense of sisterhood and solidarity amongst women in these ‘safe spaces’, or even make some women feel uncomfortable and unsafe. This argument obviously denies the complexity of trans women’s experiences with a form of privilege that could only be accessed by denying a fundamental part of their identity. It also, however, blatantly singles out one form of privilege as unacceptable, while happily glossing over all other forms of power and domination that are at play in any group of women, such as those based on racial, class, ableist and heteronormative privilege.

Secondly, in addition to dismissing these fundamental insights of Black and intersectional feminism, the political and discursive work done by ’gender critical’ feminists has re-centred a powerful figure in all the debates: the white victim. A mainstay of racist and Islamophobic discourse, the white victim has been mobilised to demonise Black and Muslim men and call for racist and anti-migrant policies for centuries.[2] Angela Davis describes how the “myth of the Black rapist” was mobilised after the abolition of slavery in the US to justify lynching and other violence against Black men perpetrated by white men under the imperative to “protect white women”.[3] In more recent times, the sexual assault of predominantly white women by a group of men including asylum seekers in Cologne fuelled a revival of anti-immigrant, Islamophobic and racist rhetoric in Germany and beyond. While these attacks were made in the name of women’s rights, feminist organisations at the time complained about the deployment of the (white) vulnerable victim trope by groups that had never before showed support for women’s safety or right to self-determination. Still, even within the feminist movement, the white victim has been paraded to criticise Black women’s political and artistic expression and reject their claims for visibility and inclusion because of their refusal to a-critically accept and reproduce the narrative of white female victimhood.[4]

Ultimately, the white victim becomes a tool to justify discrimination and violence against minoritised groups, who are in turn dehumanised and demonised in public discourse and the media. Depictions of trans women as deceitful monsters seeking to violate the purity of innocent young women and their ‘safe spaces’ recall all too clearly the starkly racist representations of Black men during the Jim Crow era. The brutalisation of Black men and their portrayal as always duplicitous and dangerous were, and sometimes still are, used to justify their murder and disproportionate incarceration. In a similar vein, the image of a male rapist pretending to be a woman to invade women’s bathrooms and changing rooms is constantly conjured up by ‘gender critical’ feminists to bolster their violent acts of exclusion against trans women and obscure their deeply harmful, and potentially fatal, consequences.

Media and public attention towards BLM and global struggles against racism and coloniality have increasingly challenged white women, including white feminists, to consider their own participation and complicity in systems of white supremacy and imperialism. Concepts like “white fragility” and “white women’s tears”[5] have become mainstream and confronted white women with the consequences of their privileged position in local and global systems of power. Many white women and feminists have started journeys of self-reflection and accountability, committed to listening to Black women and women of colour, and expanded their feminist struggle to include anti-racist objectives.

It is therefore somewhat striking that, in a moment of global reckoning around racism and imperialism, so much feminist energy is being spent debating – or rather, fighting against – the rights of trans people. Perhaps not so surprisingly, we see the figure of the white victim, this time – somewhat innovatively – a white lesbian woman or girl, return to the fore. The unusual centring of lesbian women in ‘gender critical’ narratives deserves questioning if one considers the long history of exclusion of lesbians and their concerns from mainstream feminism.[6] The ‘gender critical’ turn seems to have heralded a new era of solidarity amongst (some) lesbian and heterosexual women, functioning as an “entry pass” into certain feminist spaces for lesbian women who previously did not quite fit in.[7] At the same time, the sudden preoccupation of cis-heterosexual women with butch lesbian women and girls seems steeped into an all-too-familiar desire to rescue other women. As white women’s salvific role in transnational feminist movements is revealed as an imperialist trope rooted in the desire of “saving brown women from brown men”,[8] a new marginalised woman has been pulled out of the shadows to be saved, protected, rescued. 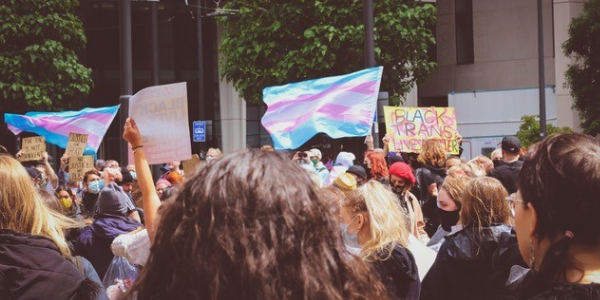 These striking similarities within feminist, racist and transphobic discourses can therefore be considered alongside the curious timing of ‘gender critical’ public outburst in the midst of a global movement against racism, and the suspicious emergence of ‘debates’ on the inclusion of trans-women within feminist movements at the same time as calls to decolonise and diversify those movements gained traction. Perhaps JK Rowling was indeed quite annoyed because BLM and other anti-racist movements had decisively shoved the conversation away from the narrative of white women as the ultimate victim towards the long overdue recognition that Black, Brown and other racialised and minoritised groups, and amongst them Black trans women, suffer incredible levels of daily violence which many white women can barely imagine. Her latest public statement on this issue explicitly depicts her as the victim of violence and intimidation. While she recognises her privilege and the level of protection it affords her, she then goes on to equate her experience to harassment, stalking and threats of rape, powerfully evoking the well-rehearsed discourse of female victimhood. In this light, ‘gender critical’ rhetoric appears as just the latest strategy to re-centre white victimhood against a global tide of anti-racist activism asking white women to consider, for once, whether they might be actually occupying the oppressor’s seat.

It is important to recognise that not all self-proclaimed ‘gender critical’ feminists are white women of course. Women of colour engaged in anti-racist activism have expressed their support for ‘gender critical’ arguments, explicitly drawing parallels between systemic racism and the alleged oppression of cisgender women by trans activists. While the analysis of their motivations goes beyond the scope of this essay, it is probably safe to assume that minoritised women active in anti-racist politics are not deploying ‘gender critical’ logics with the deliberate intent to divert feminist struggles away from anti-racist and decolonial objectives and conversations. If anything, I consider whether they might be better understood through a lens of victimhood competition, leading some voices in my own feminist circles to argue that attending to the inclusion of trans-women is an elitist, Western concern which displaces the more urgent demands of women of colour, especially in the Global South, though exploring the roots and validity of these claims would require further investigation.

Nevertheless, if we forefront the parallels between ‘gender critical’ arguments and the racist, imperialist, and homophobic rhetorical tools used by white feminists yesterday and today, it becomes clear who benefits when a narrow definition of womanhood is deployed to exclude trans women. Regardless of intentions, the re-centring of white victimhood in public media debates and feminist discussions has partially obscured conversations about race and systemic racism in the UK and, importantly, within feminist movements. It has also created concerning alliances and parallelisms between racist, sexist, conservative forces opposing the rights of all minorities and ‘gender critical’ feminists. [9] If the historical roots of so-called ‘gender critical’ feminism lie in privileged whiteness, its future is one that does not only uphold essentialist notions of sex and gender, but also systems of white supremacy. 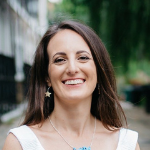 Ilaria Michelis is a PhD candidate in Sociology at the University of Cambridge and a Gates Scholar. Her research focuses on intersectionality in feminist movements and organisations who work with survivors of violence against women and girls. Ilaria is also a gender based violence practitioner, working primarily with refugee and migrant women and girls. She has lived and worked with the UN and international NGOs in Uganda, Ethiopia, Iraq and Lebanon, working with the UN and international NGOs for over ten years. Her interests revolve around feminist, decolonial and anti-racist movements, decolonising the humanitarian sector and social work and integrating practitioners’ knowledge and expertise into theory.

Bad Behavior has blocked 331 access attempts in the last 7 days.